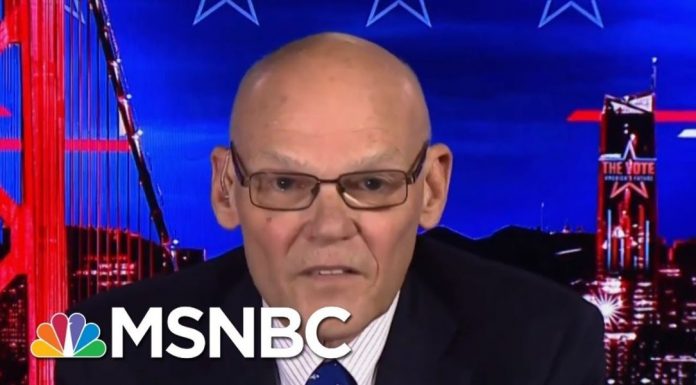 Democrats are so desperate to please the extreme “woke” crowd that they may be hurting themselves.

The left-wing crowd making these outrageous demands are, in fact, just a tiny majority of the population, but they are loud – very loud.

And now, this longtime left-wing Democrat strategist is taking his own party to task over their “wokeness.”

Carville is also not one to shy away from criticizing his own party.

Most recently, in an interview with Sean Illing of Vox, Carville cut right to the chase stating, “Wokeness is a problem, and everyone knows it.”

Carville was quick to point out that there is a language among those in the “fancy colleges” that just doesn’t apply to everyday Americans.

“You ever get the sense that people in faculty lounges in fancy colleges use a different language than ordinary people? They come up with a word like ‘Latinx’ that no one else uses,” Carville explained. “Or they use a phrase like ‘communities of color.’ I don’t know anyone who speaks like that. I don’t know anyone who lives in a ‘community of color.’ I know lots of white and black and brown people, and they all live in . . . neighborhoods.”

According to Carville, if the Democrats want to keep control of Congress and the White House, they really need to start speaking in languages the voters can understand.

It isn’t that Carville doesn’t believe the Democrat Party should not talk about race – they need to stop speaking in “woke progressive” terms that nobody actually uses.

Carville didn’t stop at criticizing the way the Left is speaking.

He continued in the interview to state that the Democratic Party’s far-left activists are preventing the Party from winning elections in rural parts of the country.

The bottom line is that these “woke” politics will undoubtedly cost the Democratic Party the majority in 2022.

If the Left wants to maintain control, they need to get with the program and stop speaking in these inane “woke” terms.

Hopefully, for the future of the country, the far-left won’t listen to Carville and give conservatives an opportunity to retake Congress in the midterms.