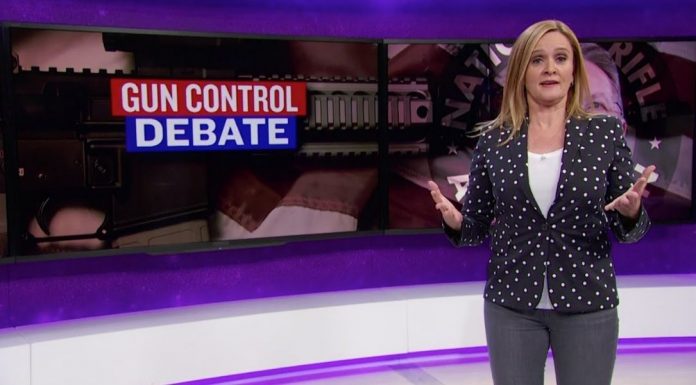 Late night comedy shows have given up on being funny.

And one late night comedian told the disturbing truth about gun control.

Samantha Bee’s TBS show is one of the worst offenders.

She veers so far to the Left, she once called Ivanka Trump a “feckless c*nt” because Bee was upset about Donald Trump’s immigration policy.

Now Bee is saying the quiet part out loud and openly admitting she wants to take your guns.

A PR statement for an upcoming episode of Bee’s show read:

“‘Full Frontal Wants To Take Your Guns’ . . . will explore how appalling and frankly stupid it is that we as Americans are told there’s simply nothing we can do about gun violence. Don’t even get us started on the whole ‘good guy with a gun’ thing. It’s high time to figure out how America’s gun problem got this bad, and what we as citizens of this glorious mess can do to help fix it.”

The Left is hopelessly ignorant on guns.

Meanwhile, the Left demonizes police officers and anyone who defends himself with a gun runs the risk of being charged severely, so people are at the mercy of criminals.

This broken system of anarcho-tyranny is spreading; criminals get free rein while law-abiding citizens get the big boot.

For example, California recently proposed a bill that would eliminate firearm enhancements for violent crimes.

So California is making it harder for law-abiding citizens to legally purchase and carry a firearm while simultaneously reducing punishments for violent criminals.

However, the anti-gun propaganda doesn’t seem to be working because reality always gets in the way.

Gun sales skyrocketed in 2020 after record sales numbers in 2019 and are continuing to set records in 2021.

COVID hysteria and the summer riots of 2020 spurred more people to protect themselves.

And 40% of the gun purchases of last year were from first-time buyers.

Bee is typical of all Democrats.

They think guns are icky, so they want them to go away.

That’s not how the Second Amendment works.