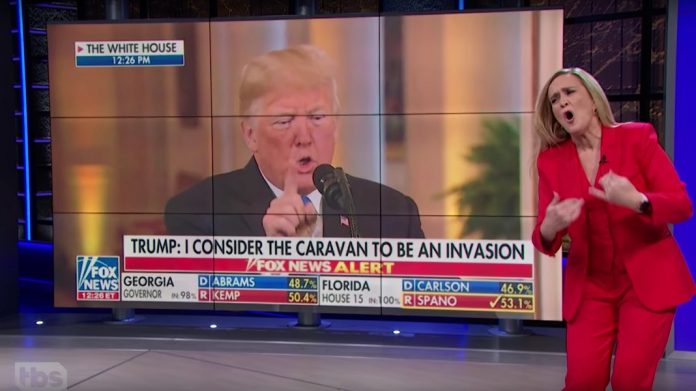 Hollywood will use anything to push their political agenda.

And their favorite punching bag is Jesus himself.

But this late-night comedian just stepped in it with this crazy attack on the birth of Jesus.

Samantha Bee is the host of the so-called “comedy” late-night show “Full Frontal.”

And she just released a promotional video for her Christmas special.

In it she makes fun of Jesus’ birth by likening him to an illegal immigrant being raided by I.C.E. and makes fun of Melania Trump for her White House decorations.

The promotional video for the “Full Frontal” stars “Christmas on I.C.E.” special starts out by mocking Melania Trump’s debut of the White House Christmas decorations. To cheerful holiday music, Bee is first seen hanging a New York Times ornament that reads, “DETENTION OF MIGRANT CHILDREN AT HIGHEST LEVELS EVER,” on a snow-covered pine tree branch.

The TBS star moves on from the tree and breaks the fourth wall by talking directly to the audience saying, “Oh, hi there. I’m just getting ready for my holiday special.”

Suddenly, the music distorts as she continues saying, “Christmas is a time for families, even those families that we’ve separated.”

Bee goes on to share that money raised from the special will go to immigrant families to help bring them back together.

“Our special will raise money to help bring immigrant families back together, and we’ll have all the traditions you’ve come to expect — joy, the border wall, special guests, the birth of the Christ child,” she said.

As Bee is mentioning the birth of Jesus, action figures of I.C.E. agents are seen dropping in on the nativity scene as she yells, “Don’t answer the door!”

According to The Christian Post, Bee’s public position on immigration comes following the Trump administration’s “zero tolerance” policy for illegal immigration. Opposition for this position has spotlighted the separation of children from their parents who crossed into the U.S. illegally starting this past June. The Christian Post notes, however, that families who go through the proper channels, such as seeking asylum, are not being separated at the border.

You can watch the video below:

Samantha Bee shows absolutely no respect for the birth of Jesus Christ.

She twists the message the Bible teaches to make a quick buck for her show and score political points.

But she has been on the hot seat for this type of behavior before.

Only five months ago Bee described Ivanka Trump as a “feckless c***” live on her own show.

She eventually apologized, but tried to defend herself pleading that she “uses it a lot on the show.”

The American people see her for who she really is: a smug, painfully unfunny political hack that claims to be a comedian.