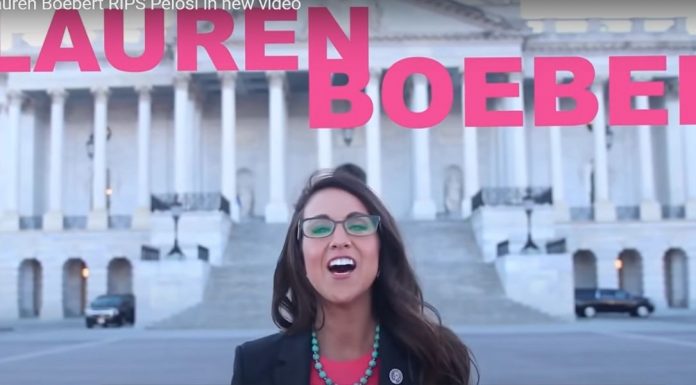 The clown world that is the Democrat Party keeps getting worse.

AOC and her “Squad” pals didn’t know what hit them after their latest tantrum in the Washington, D.C. Swamp.

But this GOP Rep. just wiped the floor with Alexandria Ocasio-Cortez and the reason why will shock you.

The Left throws tantrums over the slightest “offense” and tries to cancel everything.

Of course, the definition for offensive according to the Left is quite broad – they want everything censored or canceled.

Boebert has become a superstar in the Republican Party.

That’s because Boebert is not afraid to speak up and hold fellow Congress members accountable.

Most recently Boebert took on Alexandria Ocasio-Cortez and it was absolutely glorious.

It started over the effort by Nancy Pelosi and the Democrats to censure Republican Congressman Paul Gosar of Arizona.

Gosar is a leader of the America First movement and strong supporter of former President Donald Trump’s agenda.

Being a supporter of anything Trump does triggers the Left, so Gosar has been on the Democrat “bad” list for some time now.

That doesn’t seem to phase the Congressman and he continues on with his fight against Biden and his socialist agenda.

Gosar works hard to get young people into the Republican party and so his presence on social media is often geared towards a younger demographic.

Recently, Gosar posted a video in the style of anime, which is Japanese animation.

The video barely got posted on Twitter and the Left erupted calling for Gosar’s removal from the platform, censorship of his tweets and now they want him expelled from Congress.

Alexandria Ocasio-Cortez complained that Congress doesn’t protect women of color and is spearheading the campaign to do away with Gosar.

Ocasio-Cortez took to the House floor to complain about the incident with cartoon characters.

“It is a sad day in which a Member who leads a political party in the United States of America cannot bring themselves to say that issuing a depiction of murdering a Member of Congress is wrong,” Ocasio-Cortez stated.

This is all over a cartoon.

Well, Lauren Boebert wasn’t going to let this one slide.

“This is a dumb waste of the House’s time, but since the Speaker has designated the floor to discuss members’ inappropriate actions, shall we?” Boebert began.

Boebert continued on to slam Minnesota Representative Ilhan Ohmar and call her a “Jihad Squad” member.

Then she blasted Maxine Waters for inciting violence in the streets outside a courthouse over her command to protestors to “get more confrontational” if Derek Chauvin was not found guilty of killing George Floyd.

Then Boebert went for the jugular when she reminded Congress of Representative Eric Swalwell’s run in with a Chinese spy who targeted U.S. politicians – it is believed Swalwell had a sexual relationship with the spy.

“The cherry on top—my colleague and three-month presidential candidate from California who is on the Intelligence Committee slept with Fang Fang, a Chinese spy,” Boebert said. “Let me say that again, a member of Congress who received classified briefings was sleeping with the enemy! This is unacceptable!”

Round of applause for Congresswoman Lauren Boebert and her courage to call out the blatant hypocrisy on the Left.

America needs more elected officials who are willing to stand up to the Democrat machine.