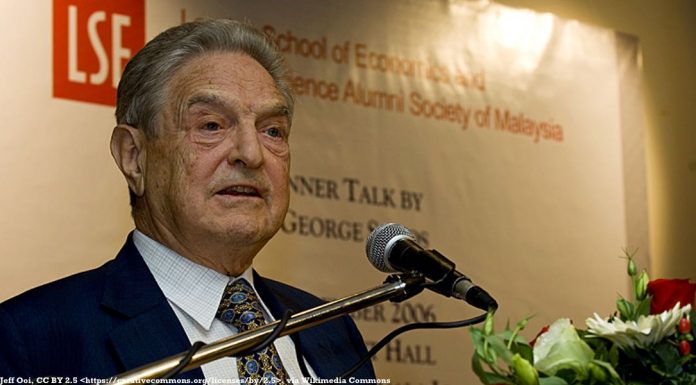 That means you can read their insane blueprint for all the mere serfs, if you can stomach it.

Because this George Soros mouthpiece just unveiled the latest update to the Left’s dystopian playbook.

The book is “Book 2” of The Great Reset and is, in the words of one reviewer on Amazon, “A Wonderful Insight Into The Billionaire Sociopath’s Mind.”

Another reviewer deemed it a “genocide manifesto.”

According to Schwab and co-author Thierry Malleret, the book is “a guide for anyone seeking to better understand how the world has evolved since the pandemic started and what solutions can make us more resilient, equitable and sustainable.”

While the authors promote it as an “optimistic book” they also, in the most reasonable sounding way possible, have you in their cross hairs.

In one section the authors note, “It should come as no surprise that research conducted during the pandemic has exposed a link between COVID-related uncertainty and anxiety and an increased likelihood of adhering to conspiracy theories.”

They then went on to repeat the same old story we’ve heard thousands of times: anyone who doesn’t blindly comply with global overlord orders is the enemy.

“This is part of the reason why powerful anti-science movements prolong the waning of the COVID-19 pandemic, hindering both public health and, more fundamentally, our ability to move forward in unison.”

Naturally, they’ve never considered that what they’ve dubbed as “anti-science” is so powerful only because digging beneath convenient government narratives reveals truth—a force more powerful than their lies.

It’s also interesting that “our ability to move forward in unison” is more important that public health.

The authors also made it clear, their eye is on the future and how they can turn the current crisis into a chance to manage all of us in the future.

“Beyond the limits of the pandemic, the abundance of fake news and its ability to magnify and manipulate polarization hinders our ability to deal successfully with the momentous collective action problems that humanity faces,” they wrote.

It seems the answer they’ve found to make their ideas for the future “palatable so a large majority of citizens” will embrace them has to do with letting all the academics and specialists in the world be guided by one master narrative.

Naturally, every narrative needs an author — and as much as they try to dance around it nicely it’s clear Schwab and Malleret wield the pen.

Incidentally, this is a moment Schwab — an engineer born in Germany in 1938—has been preparing for more than half a century.

Schwab founded the World Economic Forum in 1971 and has been trying to figure out how to fiddle with our lives ever since.

The World Economic Forum is clearly a tool used by Socialist global elites like George Soros to do just that.

And it’s clear the Soros-WEF ties are very deep.