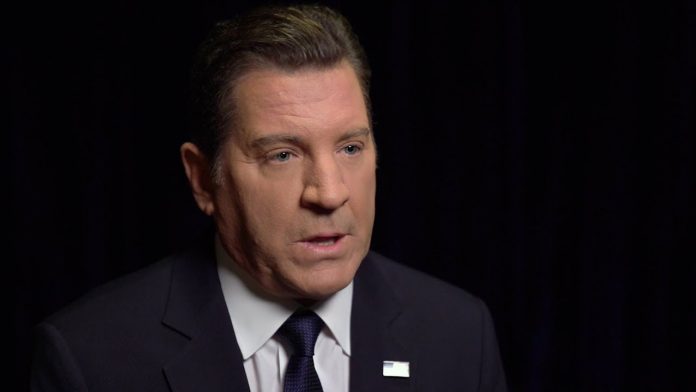 These days everyone seems to be walking on eggshells when it comes to saying anything about anything.

It’s especially bad if you’re a white male because anything they say seems to get twisted into a racist comment.

And this former Fox News star just stormed out of an interview after he was accused of being racist.

Eric Bolling was most widely known for his time as a commentator on a number of Fox News shows.

Most recently, Bolling was a guest on the BBC’s Newsnight, where he was discussing Georgia’s new voting law and Major League Baseball’s recent move to relocate the All-Star game in response to the new law.

During the interview, Bolling stated that the MLB’s decision to move the All-Star game out of Atlanta hurt minorities and their business.

Reports show that Atlanta will lose over $100 million in revenue because of this decision by the MLB.

In response to Bolling’s comment, fellow guest, political commentator, Aisha Mills said, “I think it’s really rich for any Republican – especially a white man – to run around and claim they care about the economic condition of black communities and black businesses when that’s all a lie.”

Bolling quickly responded to the comments made by Mills, saying that she doesn’t know him and it’s not fair to paint that picture.

Of course, Mills couldn’t accept what Bolling said and continued with her liberal extremist tirade about every white man being racist.

“I am . . . a black person in America. Everything that these voting laws stand for . . . is all about racial discrimination. How dare you try to act like you are somehow a proponent of black people and businesses just to make a point and try to create a wedge? It’s ignorant, and it’s disrespectful,” Mills yelled back.

With clear disgust and frustration in his voice, Bolling went to say he was done with the interview and that simply because he is white, Mills thinks it’s okay to call him racist.

Bolling called her statements racist and demanded an apology, to which Mills said, “I’m not going to apologize for you being offended.”

And without missing a beat, Bolling said, “I’m done,” and left the interview.

The Left continues to push this idea that if you’re white and say anything, absolutely anything, about blacks that they don’t like, you are a racist.

It is the card they are using to win every fight because they know it’s hurtful.

This continued idea that all whites, especially white men, are racist will be American society’s eventual downfall.

The United States will not last if it continues to divide itself in this fashion.

Stay tuned to Culture Watch News for any updates to this ongoing story.