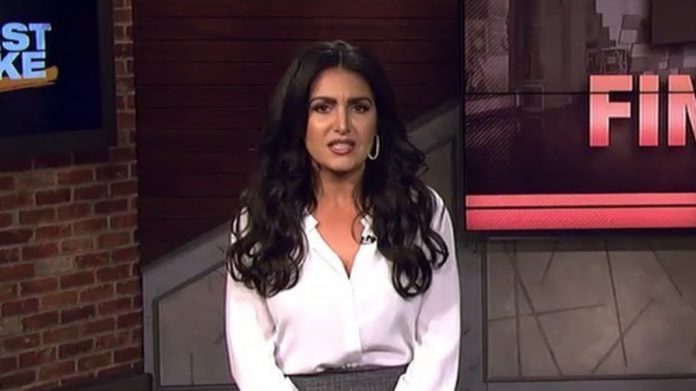 ESPN has been veering further and further to the left.

It all ramped up when they had wall-to-wall coverage of Colin Kaepernick’s anti-America national anthem protest.

But now you won’t believe what this ESPN host said about Trump that turned her into the village idiot.

He bought the football players fast food out of his own pocket because the government shutdown kept the White House kitchen staff from working.

I had a choice. Do we have no food for you, because we have a shutdown? Or do we give you some little quick salads that the first lady will make, along with, along with the Second Lady. They’ll make some salads. And I said, ‘You guys aren’t into salads.’

On ESPN’s “First Take,” Molly Qerim said her mind went in “a very different place” when she heard of the President treating college students to free food.

She was insinuating Trump was racist.

Her thoughts went
somewhere else? She’s trying to ring that race bell when there was nothing racist about it..what
does “predominantly black athletes” and fast food have in common? Never heard this
stereotype before @ClayTravis maybe you have pic.twitter.com/W3if3gPkI3

I guess leftists didn’t get the memo that almost half of all Americans eat fast food, and that
number shoots up even higher in the college-age demographic.

Trump bought fast food because that’s what college students like to eat and the government shutdown left him out of options.

ESPN’s ratings have been in the gutter ever since they became a mouthpiece for social justice warriors.

Their wall-to-wall coverage of national anthem protests drove people away from their outlet.

ESPN kept Jemele Hill on their network long after she openly bashed Trump.

The only reason they fired her was to save face when they realized viewers were leaving.

Do you think President Trump is racist for serving the Clemson football team fast food?

Or was this ESPN host out-of-line for calling Trump racist?