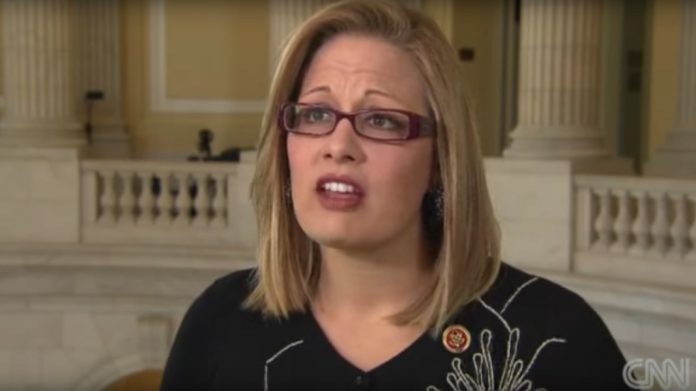 Radical leftists attack conservatives every chance they get.

And they ridicule conservative thought and belief to no end.

But what this sitting U.S. Representative and Democrat Senate candidate said about stay-at-home moms crossed the line.

Democrat Kyrsten Sinema is a representative for Arizona.

She is also running for Senate in Arizona – one of the closest races in the country.

But her past statements attacking stay-at-home moms are coming back to haunt her.

She said in an interview that stay-at-home moms are “leaching off their husbands.”

Democratic Senate candidate Kyrsten Sinema, of Arizona, once described stay-at-home moms as leeches in a 2006 interview.

“These women who act like staying at home, leeching off their husbands or boyfriends, and just cashing the checks is some sort of feminism because they’re choosing to live that life,” she told Scottsdale nightlife magazine 944. “That’s bull****. I mean, what the f*** are we really talking about here?”

Sinema, who has come under fire recently for making derogatory comments about Arizona in newly resurfaced videos, also once described conservatives as “Neanderthals.”

In one video, Sinema is seen grimacing and shaking her head after saying that she ran for a position in the Arizona state legislature.

In an interview with KTAR on Wednesday, Sinema was asked if she considered herself a “proud Democrat,” a descriptor she balked at, insisting that she’s a “proud Arizonan,” and that she doesn’t think either political party is doing a good job.

She can’t fathom a world in which a woman would want to stay at home to raise a family.

Sinema’s sentiments are not unique, however.

Conservative ideas, and more importantly conservative families, are under attack from the left today.

Hillary Clinton made her “deplorable” comments about Trump supporters that all but secured a win for Donald Trump.

Joe Biden recently called conservatives “dregs of society” at a gala for an LGBT rights organization.

And the statements these radical leftists share are indicative of their disdain of conservatives.

It manifests itself in calls for violence that Maxine Waters, Hillary Clinton, and Eric Holder signal in their speeches and interviews.

They want to hide anything remotely traditional from our youth, and young adults, so as to institutionalize them in their so-called “progressive” fantasies.

Do you think Kyrsten Sinema’s derogatory comments about stay-at-home mothers will cost her the Senate race?