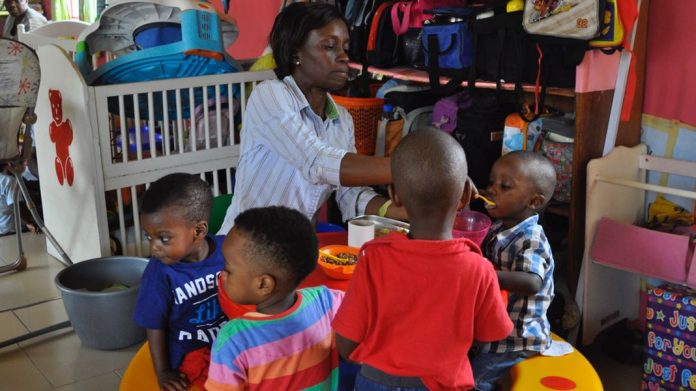 So-called “progressives” say it takes a village to raise a child.

They want to teach them the ways of the secular world.

But this daycare is facing a lawsuit after employees were caught red-handed doing this one thing.

A mother is suing a daycare in Missouri after a video surfaced showing kids in the daycare forming a “fight club.”

Daycare employees can be seen cheering and egging on the toddlers to throw punches.

A disturbing video taken at a St. Louis daycare shows toddlers punching each other in a ring as the adults in the room encourage the violent fighting. The December 2016 incident is being described as a “daycare fight club” and the mother who obtained the video is now suing the school.

Nicole Merseal says one of her her sons, who was 10 years old at the time, filmed the fighting with his iPad, KTVI reports. Her son was worried about his little brother, who was in the next room being beaten up by his classmates. He began filming the bizarre fighting and sent the video to Merseal.

The video shows a child wearing hulk fists and punching another boy in the head as a teacher jumps up and down in excitement. Another teacher is also present in the video, and is seen putting the toy fists on a child and teeing him up for a fight.

“He doesn’t understand why his friends were fighting him. Why he was beaten up by his best friends,” Merseal said.

Both teachers in the video were fired, according to a police report, KTVI reports. Inspections of the Adventure Learning Center were increased after the incident, and other violations were found. Merseal, however, believes more has to be done.

“I want them to be held accountable and I don’t want this to happen to any other child,” the mother told KTIV. She is now suing the school.

You can see bits of the video below.

CBS reports the teachers in the video have been fired.

This behavior is a direct result of despicable encouragement to fight on the part of the employees.

It is completely normal to see young kids play rough, but to see daycare employees encourage full on fighting is unthinkable.

This is why there are some mothers who insist on staying at home with their children.

But some radical leftists have disdain for those women.

As we reported, a Democrat candidate for Senate attacked stay-at-home moms, saying they are leeches.

So-called progressives think it is the responsibility of the “village” to raise a child.

They want to get their claws on young kids to teach them their morally deficient and godless ways.

But it is ultimately up to the parents to decide how they raise their child.

Do you think the daycare should face legal consequences? Let us know in the comments below.