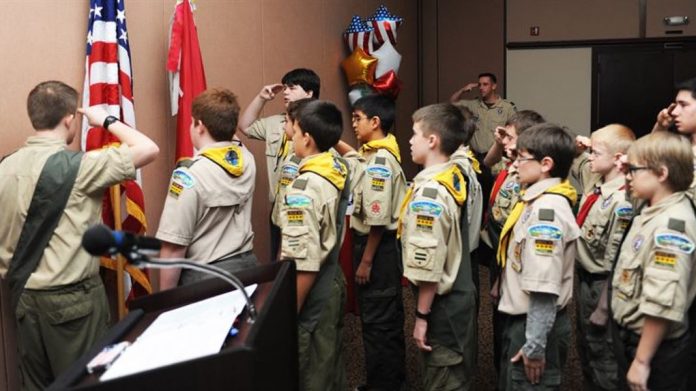 Scouting used to be about turning real boys into real men.

And this Cub Scouts leader made a big mistake after the Boy Scouts adopted one twisted policy.

Cancel culture has been running rampant over the past several years.

And Leftists have taken it so far that even their own kind can’t follow the rules of the woke mob they have created.

But one writer who was cancelled by the woke mob for misgendering a bearded transgender she-male has finally gotten her name cleared by the organization formerly known as the Boy Scouts.

Back in 2017, the Scouts reversed a century-old policy and began allowing transgenders into the organization.

That’s what led to Maya Forstater, an assistant Cub Scout leader – who is also a famous writer in the U.K. – who tried to follow the spirit of the policy and it turned her life upside down.

Back in 2019, Maya Forstater made the mistake of her life by calling a woman, who had a beard and identified as a wanker holder, a “he” rather than his preferred pronoun of “they”.

Little could she have imagined that her own kind would cancel her from the “prestigious” Scout Association for her crime against humanity.

Well as this madness has continued even some on the Left are starting to awaken to the monster they have created in the woke mob.

So after being booted from the group, the Scouts Association has finally reversed course on canceling Forstater after a two-year investigation.

The Association issued an apology stating that Ms. Forstater “did not deliberately misgender the complainant to cause harm.”

The apology continued to state that she “did not spread lies about” the she male.

When asked about the apology and her cancellation by the woke mob, Forstater claimed “The whole process has been bullying from start to finish. They didn’t interview me. They ignored my evidence. They made things up I hadn’t done.”

When Gregor Murray complained about me to the Scouts, Murray claimed not to be a man (and also not to have been suspended)

The Mail has now removed the "M" word from their headline.

Did they get a similar complaint?

We must be able to talk about reality without being bullied. pic.twitter.com/ZQDL4F0XOy

In today’s age you can’t say anything that might offend someone else.

Comedians are crucified for making people uncomfortable with their jokes.

Heaven forbid if you believe that a woman is a woman and a man is a man.

But even people who are buying into the Left’s delusions have been canceled from society.

But since it’s the season of giving, it’s nice to see that the Left is getting a taste of their own medicine.

They created this cultural monster so now they get to deal with it.

But if the Scouts really want to make amends, they should abandoned their insane transgendered policy and make Boy Scouts for turning real boys into real males again.

But don’t count on that.