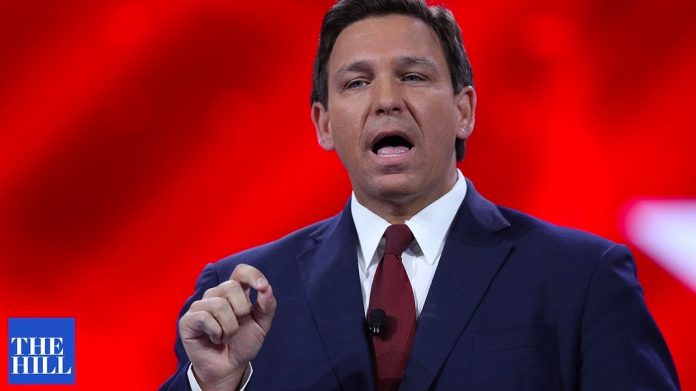 Joe Biden and the Left promised the political discourse would be all “fair play” and “unity” if he was elected.

The only “unity” they want is the kind that bows to the Democrats’ radical agenda.

And now the cruel news about DeSantis proves the tolerant Left wants to scorch the earth when a true threat to their radical agenda emerges.

If Democrats can take advantage of any tragedy to help further their power they will.

It may as well be rule number one for leftist politicians.

They often preach that Americans must show tolerance and unity at every turn.

By that they mean fork over dollars not to help your fellow Americans but to expand Democrats’ voting base and enrich the overseers administering the handouts to the Left’s preferred groups.

Usually they’re quick to claim the suffering among those individuals is “no fault of their own.”

Although that is sometimes true, usually it’s a complete lie when it comes from a left-wing politician’s mouth.

Just look at how leftists scream racism, sexism and all sorts of other lies about people on the Right who merely disagree with them. That’s a good baseline on how genuine leftists are about tolerance and compassion.

But a better barometer is the glee they take when a real-life, through-no-fault-of-their-own tragedy strikes in the lives of those they see as real political threats.

Ron DeSantis has become enemy number one to many on the Left.

DeSantis is widely viewed as the favorite to win the White House should Donald Trump not seek the nomination in 2024.

So it’s not surprising anything the Florida Governor does is called evil by the Biden administration and its followers.

Despite massive success in pushing back against tyrannical COVID mandates and his star shining brighter than ever, DeSantis’ opponents paint him to be an authoritarian ogre.

Now, the DeSantis family is facing a true crisis and the supposed “tolerant” Left, the Democrat Party always prattling on about “unity and equality” is showing just how low they can really go.

Governor Ron DeSantis released a statement announcing that his wife, Casey, has been diagnosed with breast cancer.

“I am saddened to report that Florida’s esteemed First Lady and my beloved wife has been diagnosed with breast cancer. As the mother of three young children, Casey is the centerpiece of our family and has made an impact on the lives of countless Floridians through her initiatives as First Lady. As she faces the most difficult test of her life, she will have not only have my unwavering support but the support of our entire family, as well as the prayers and well wishes from Floridians across our state. Casey is a true fighter, and she will never, never, never give up.”

This is sad news for the DeSantis family and no doubt a time when anyone – no matter their political beliefs – should expect compassion from all people of good will.

It took no time at all for many radical leftists to take to the internet exclaiming this is what the DeSantis family deserves as a result of the Governor’s actions on COVID.

Twisted and pitiful are the only words to describe a person who holds such deep hatred in their hearts.

Fortunately, there are still some good people in this world who are lifting Casey DeSantis and the entire DeSantis family up during this time with prayer and good will.

One can only hope that those so blinded by their leftist politics can one day see the error of their ways.