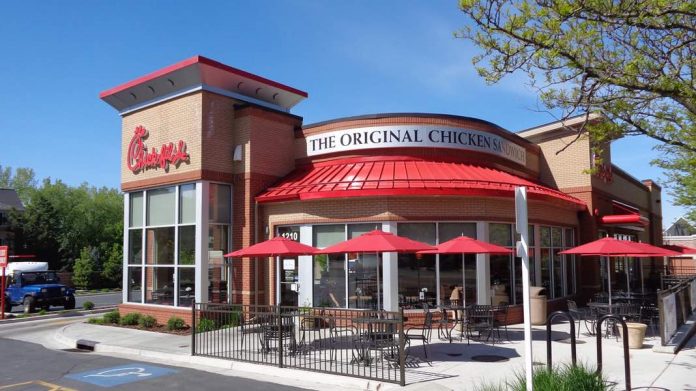 Far-left Democrats are pushing one of the most radical anti-God, anti-family, anti-American agendas this country has ever seen.

They believe that anyone who does not align with their extremist liberal beliefs must be silenced.

And this could mean the end for Chick-fil-A if the Dems get their way.

Chick-fil-A has become quite possibly the most popular fast food joint in the U.S.

Its down-home chicken sandwiches and sweet tea coupled with an incredibly efficient and friendly staff make it a top choice for many seeking a quick but tasty meal.

The famous chicken joint was founded in 1946 and boasts 2,672 restaurants in the United States.

Chick-fil-A’s corporate values are rooted in a strong Christian faith.

The company’s founder, Truett Cathy, was a devout Southern Baptist who worked hard to ensure his faith was evident in every facet of Chick-fil-A.

And, right there is why Democrats are calling for Chick-fil-A to be banned from New York’s state-owned rest stops.

Surely no one wants a restaurant with a solid Christian foundation feeding people at a rest stop.

New York state legislators Harry Bronson, Deborah Glick, and Daniel O’Donnell are trying to block Chick-fil-A restaurants from all New York rest stops because they don’t like the values of the company executives.

Yes, these legislators do not like the values Christians portray, such as helping those in need, loving their neighbors, and embracing the fallen.

Once again, we see an instance of Democrats not accepting the beliefs of others because, in their perfect world, everyone would think, talk, and act like them.

In a July 9 letter written by Bronson, Glick, and O’Donnell, they state that “Chick-fil-A and its founders have a long and controversial history of opposing the rights of LGBTQ+ individuals and families.”

They go on to address that in the company’s 2017 tax filings, it shows they supported groups such as The Salvation Army, which has gone on record as being firmly opposed to LGBT rights.

Any logical person who isn’t cool with the beliefs of a company just makes a personal decision to not patronize said company, but that’s not enough for Democrats.

Democrats do not want people to have a right to choose where they do business. They must control everything, including where people eat.

It is another example of the Left’s loathing of personal choice.

Well, personal choice . . . in this instance.

They believe that in the matter of taking the life of an unborn child, everyone should have a choice, but not in the case of where someone buys a chicken sandwich.

There is no logic to what they do.