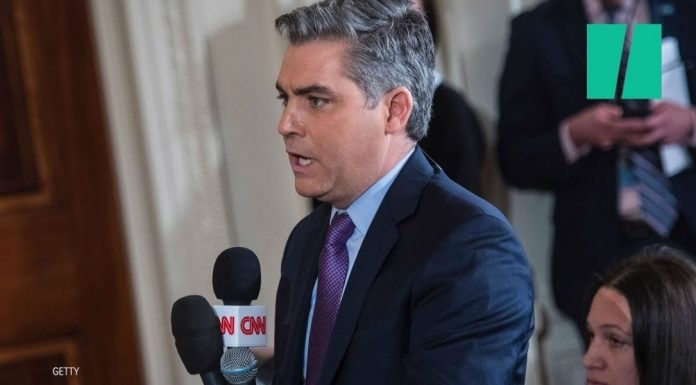 CNN’s lineup of left-wing, woke, liberal reporters has been struggling lately due to not having Trump to complain about anymore.

That, however, hasn’t kept them quiet, and their antics appear to be even more outrageous lately.

There is one thing you should know about CNN’s Jim Acosta, and that is that he loves him some Jim Acosta.

The CNN reporter, and former White House correspondent, does not lack in the ego department.

Just this past Monday, his self-confidence was on full display for all the Twittersphere to see.

Acosta posted a photo of himself on Twitter while receiving the coronavirus vaccine donning a self-aggrandizing T-shirt about his reporting.

“In 2020, I covered the impeachment trial & a caucus night (that lasted a week) & the primaries & the covid pandemic & the economic crash & the racial justice protests & Lafayette Square & so many rallies & the death of RBG & the president’s 1AM coronavirus diagnosis & a Supreme Court confirmation & an election night (that lasted a week) & things by tweet & the recounts & the presidential transition & I have a commemorative shirt to prove it.”

Throughout the Trump administration Acosta positioned himself as a leader of the anti-Trump movement inside the White House press corps and was well known for making himself the center of attention by shouting at President Trump during briefings and arguing with members of the administration.

Journalist Michael Tracey retweeted Acosta’s post and said, “Someone should probably inform Jim that he’s contributing to vaccine refusal rates by continuing to make everything an obnoxious self-flattering spectacle.”

The Twitterstorm didn’t stop with one user saying, “Jim Acosta got a shirt to commemorate himself. Epic levels of narcissism.” Another tweet read, “Find someone who loves you the way Jim Acosta loves himself.”

There is no doubt that Jim Acosta’s level of self-love is something most people could not even fathom, and the roasting on Twitter doesn’t appear to phase the egomaniac either.

It’s no wonder CNN’s ratings are in the toilet.