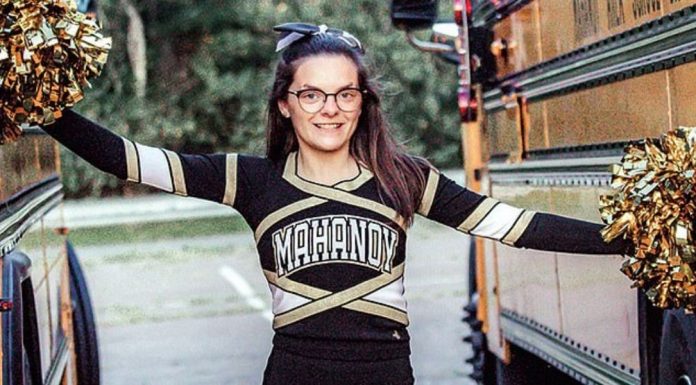 It wasn’t long before the Democrat-controlled education system started trying to control your kids outside the classroom.

They continue to indoctrinate children with radical Left ideas.

And now this cheerleader’s case is going before the Supreme Court, and its outcome could mean very real changes for Americans.

Brandi Levy, a sophomore in Scranton, Pennsylvania, was removed from the Junior Varsity cheer squad at her school after the coaches saw a screenshot of something she posted on the social media outlet, Snapchat.

The video was laced with profanity and statements from Levy like “F— school” and “F— cheer.”

Levy made the Snapchat video while at a convenience store off-campus, which is now the center of the case – Mahonoy Area School District v. B.L. – that the Supreme Court is set to consider later this month.

“The Court should make clear that the First Amendment does not allow schools to censor students’ speech anytime and anywhere,” said John Bursch, senior counsel at Alliance Defending Freedom.

The case went on to say that the free speech of students is protected as long as it is not disrupting school.

Now the Supreme Court may decide whether this protection applies to off-campus speech as well.

Levy’s coaches say that her video disrupted the cheer team and harmed the school.

The 3rd U.S. Circuit Court of Appeals noted in its decision, siding with Levy, that she “created the snap away from campus, over the weekend, and without school resources, and she shared it on a social media platform unaffiliated with the school.”

Even the dissenting opinion noted that the “Snap is not close to the line of student speech that schools may regulate.”

It was only a matter of time before the liberal run government school system tried to control what your children were doing and saying outside the classroom.

Americans can only hope that the Supreme Court will agree and rule that educators cannot regulate kids’ speech outside the classroom.