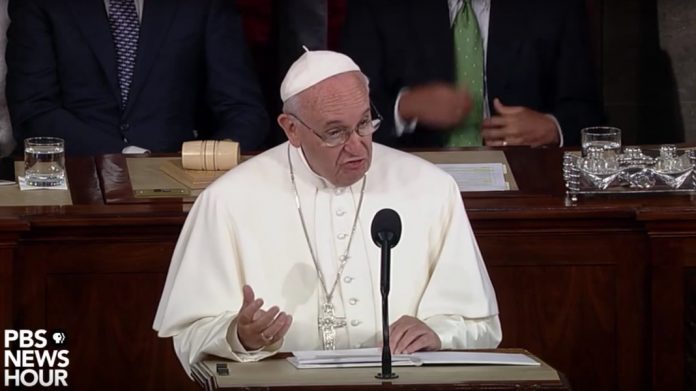 A Catholic Diocese is trying to practice the biblical principles the church holds.

The Diocese move clearly ran afoul of leftists but that doesn’t explain why it isn’t getting backup from Rome amidst the Pope’s crusade to fix climate change.

And this Diocese is sure to have Pope Francis boiling mad over biblical principles that detract from his squishy policies.

The Catholic church is slowly falling apart and many traditional catholics around the world are beginning to question where the leadership stands on some very core issues.

The current Pope and his war on climate change, meetings with pro-aborts like Joe Biden and squishy stance on gay marriage doesn’t help matters.

And now the Catholic Diocese of Marquette in Michigan is trying to practice the biblical principles the church holds, but it’s getting pushback.

Catholics around the world are receiving mixed messages from church leadership and it doesn’t bode well for the church’s future.

Disagreements about Communion participation for pro-aborts like Joe Biden and Nancy Pelosi rages on while the Pope continues to send messages to the people about fixing the climate change problem.

On the outside, the Catholic church looks to be hanging on by a thread and, now, many are realizing it’s even worse on the inside.

The Marquette Diocese has made it clear that gay and transgender people could only receive communion if they have “repented” – this is a core teaching of the church.

“In this disorder there is an incongruence between how the persons perceive themselves and their bodily reality. Just as we would refer a person with anorexia to an expert to help him or her, let us also refer persons with gender dysphoria to a qualified counselor to help them while we show them the depth of our love and friendship,” the statement read.

But, of course, the LGBTQ community erupted at the thought that a church would hold views that don’t align with their radical agenda.

It’s clear that these members of the radical Left are not in favor of anyone having thoughts, opinions or a faith that diverges from theirs – we must all believe what they believe, or we’re labeled unloving bigots.

The Michigan Diocese went on to state that transgender people and people in same-sex relationships should not receive communion or be baptized – a core tenant of the Catholic church.

They also said that if they wanted to participate in the sacraments of the church, they must repent by leaving their same-sex relationship and/or living as the gender they were born with.

Advocates for transgender rights and the gay/lesbian movement call this discriminatory and hateful.

These are the same people that tell everyone to “live their truth.”

They neglect to mention that you can only “live your truth” if it’s their truth you’re living.