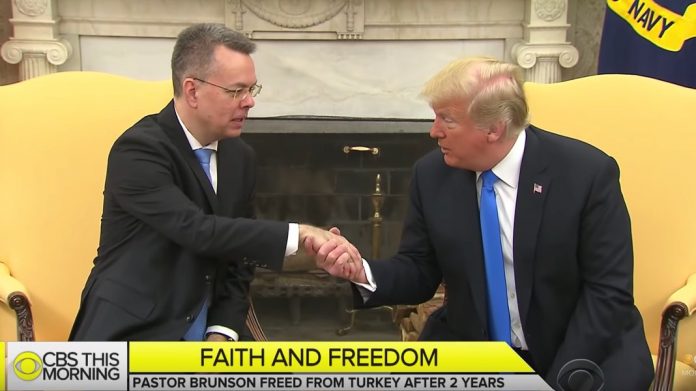 Pastor Andrew Brunson was arrested as a spy after a failed coup attempt in Turkey in 2016.

He was imprisoned for two years until Trump secured his release.

Now he’s just revealed what gave him hope during those two long years.

Pastor Brunson appeared on “CBS This Morning” to talk about his experience in Turkey.

He shared that a passage in the Bible from 2 Timothy encouraged him to persevere and “finish the race well.”

The 50-year-old Brunson, who spent over two years in detention in Izmir before his release earlier this month, appeared on “CBS This Morning” last week to talk about his imprisonment for what he says are false terrorism charges.

Appearing on the show with his wife, Norine, Brunson detailed the tribulations of his detention and was asked if he was allowed to keep a Bible while in prison and if there was a passage from the Bible that helped him through the experience.

“It took a while before I could have any books or Bible but eventually I did have one,” Brunson, a North Carolina pastor who ministered in Izmir for over two decades, answered.

“I read 2 Timothy where Paul talks about suffering and finishing the race well,” Brunson added. “This became my prayer. I want to be faithful and endure and finish well.”

He also explained how his wife Norine, who was released after only 13 days, encouraged him to keep going.

“I could see Norine, for example, 35 minutes a week through window glass talking by phone. She actually is very strong and had to take me through this emotionally and spiritually. She was the only one I could receive truth from. So when she would come in, she would encourage me and that is what would keep me going through the next week.”

It is unknown whether the Turkish government used Pastor Andrew Brunson as a bargaining chip for its own benefit.

But this has become the standard for much of the Middle East.

Christians are being persecuted and even executed for their faith.

A study from “Open Doors”, a Human Rights organization, found that more than 215 million Christians face “high levels” of persecution around the world.

However, Democrats insist that it’s racist and xenophobic to acknowledge these facts.

And it was the Obama administration that refused to acknowledge there was a real Christian genocide taking place.

What are your thoughts about what happened to Pastor Brunson?