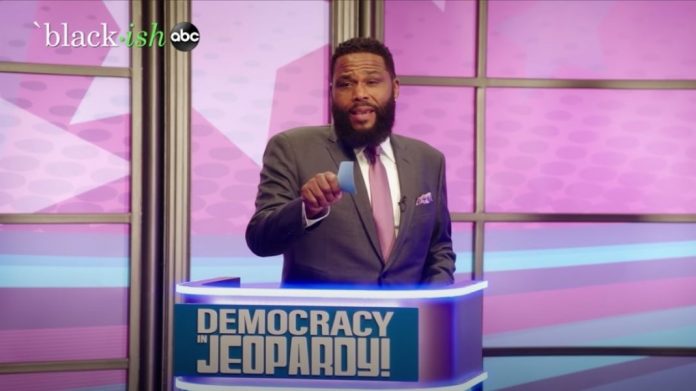 Trump Derangement Syndrome has made Hollywood entertainment even more obnoxious and stale.

Television shows and movies have been infused with left-wing messaging for years, but it’s gone over-the-top in the Trump era.

The ABC sitcom Black-ish is no stranger to nauseating political propaganda.

An episode of the show that portrayed Donald Trump as an evil storybook villain recently aired on Hulu after executives were apprehensive about airing it on ABC.

Now the show dedicated an hour-long special to spreading misinformation about voting in America.

The character Junior says to his father in a political rant:

This is completely absurd.

America is the freest and most prosperous country in history, and the electoral college was created to prevent a tyranny of the majority.

Apparently, the Left wants the urban metropolises of New York and Los Angeles to dictate the laws for everywhere else in the country.

And nobody is clawing back voting rights from black people or any other Americans.

Black voter turnout has increased in every election since 1990, and in 2012 and 2016, black people outvoted other demographics in terms of proportionality.

In fact, the show featured a guest appearance from failed Georgia gubernatorial candidate Stacey Abrams who still refuses to acknowledge Brian Kemp as the rightful governor of the state.

Abrams claims that the black vote was suppressed because of polling station closures in minority areas, but that decision was made by the Democrat-run state representatives.

Democrats have also argued that voter ID laws are somehow racist, but it’s absurd to suggest that people in 2020 can’t be asked to produce a photo ID before voting.

Virtually every other western country requires a photo ID to participate in elections, but somehow that’s too big a burden in America according to Democrats.

Democrats have been relying upon propaganda like this for decades.

They spread their talking points through culture and so many people just accept it as fact.

But people on the Right are finally beginning to push back in the culture war.