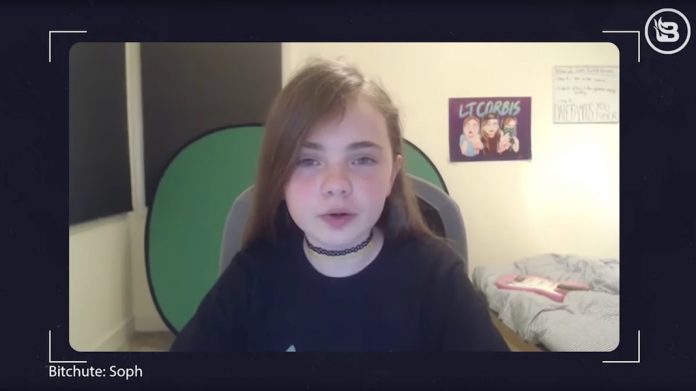 Anybody who speaks out against the radical Left instantly becomes an enemy.

They will stop at nothing to destroy them for “wrong think.”

And radical leftists did something awful to silence this 14-year-old girl after she spoke against them.

One of the main forms of attack the radical Left uses against their enemies is deplatforming.

Deplatforming is when they force online companies to shut down their political enemies on their platforms.

And their latest target is Soph, a 14-year-old girl who amassed a massive audience with her often profanity-laden videos where she generally makes fun of the insanity that is modern liberalism.

She has gone after radical Islam, climate change, and pedophilia in Hollywood.

But it was her latest video, titled “Pride and Prejudice” — where she goes after the LGBT agenda — that led the radical Left to truly strike back.

After posting the video, YouTube, which is owned by Google, shut down her page — where she had over one million subscribers.

YouTube, Google’s sister company, deplatformed a 14-year-old conservative girl after she made a video criticizing Pride Month. Her channel has been completely banned from YouTube.

Soph, known on twitter as @sewernugget, has been penalized by YouTube previously with suspension for “dangerous” humor and poking fun at leftist orthodoxy. With approximately 1 million subscribers before she was shut down, she rose to fame for poking fun at topics such as radical Islam, climate change, and pedophilia among Hollywood elites.

While her channel has been removed, conservative pundits like BlazeTV host Lauren Chen have reported on its removal, reviewing the content and theorizing why it was taken down.

Chen featured one clip from Soph’s video “Pride and Prejudice” which got her banned. In the video she commented on the nature of LGBT politics: “When you attack the concept of gay pride for what they’re doing to children” the left will respond by attacking the critic as someone who hates all gay people, she explained. “It’s morality laundering, they put the indefensible together with the legitimate so that you can’t scrutinize it without being called a homophobe.”

Soph’s video wasn’t going after gay people themselves, but rather the LGBT agenda and their continued targeting of children.

With the proliferation of “drag kids” dancing in strip clubs in front of adults and “drag queen story hours” that have allowed convicted child molesters to gain access to children, it’s difficult to actually argue against her point.

So instead of responding, LGBT activists got her YouTube channel shut down.

Do you think disagreeing with the radical LGBT lobby is hateful?