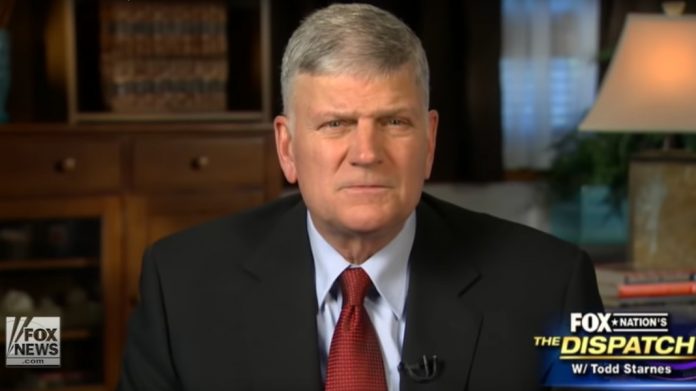 Celebrities, politicians, and CEOs are all very aware of the cancel culture currently invading everyday life.

By and large, the Christian community seems to be keeping its head on straight and staying out of the cancel culture world.

Well, that is until recently, when a group of so-called “Christians” began calling for Franklin Graham’s firing for this absolutely outrageous reason.

The group behind the call to fire Graham is Faithful America.

Faithful America describes itself as the “nation’s largest online community of Christians organizing for social justice.”

In reality, Faithful America is a left-wing activist group that protests any policy that has even a hint of conservative characteristics.

The group proudly fought against Hobby Lobby and forced MSNBC to drop Family Research Council as a guest on one of its news shows.

They have also protested against numerous evangelical leaders, yet the leftist media has dubbed them the “voice of American Christians.”

What is the group’s reason for wanting Graham fired?  They don’t like that he agreed with President Trump that the Presidential Election may have been rigged or stolen.

Faithful America has circulated a petition calling for Graham’s firing from Samaritan’s Purse and the Billy Graham Evangelical Society – the petition has garnered just 16,000 signatures.

In the petition, the group laughably argues that Graham’s support of Trump’s claims helped to incite the mob of the rioters who stormed the U.S. Capitol.

The petition went on to say, “As long as Samaritan’s Purse and the Billy Graham Evangelistic Association stand by Franklin Graham, it must be said that these once-vaunted organizations have forgotten their original Christian missions, abandoned the Gospel of Jesus Christ, and are complicit in the spread of dishonest, discredited election conspiracy theories and the deadly, unpatriotic, white-nationalist terrorism at the U.S. Capitol incited by those lies.”

Of course, this is not the first time Faithful America has called for Franklin Graham’s removal.

The group previously called for Graham to be fired after he simply prayed at the Republican National Convention. Faithful America it seems doesn’t believe Republicans need prayer.

Groups like Faithful America and others of their ilk do nothing more than use faith as a cover to silence conservatives and those spreading the Gospel.

Instead of regarding the Bible as the inerrant Word of God and following its teachings, these churches and groups bend the scriptures to fit their narrative and take down true, Bible believing, followers of Christ.

They are hellbent on silencing the Gospel.

Christians must stand firm in their beliefs and be leery of anyone that preaches in favor of worldly views.

Christ-followers are not to be conformed to this world.

“And you will be hated by all for my name’s sake. But the one who endures to the end will be saved.” Mark 13:13