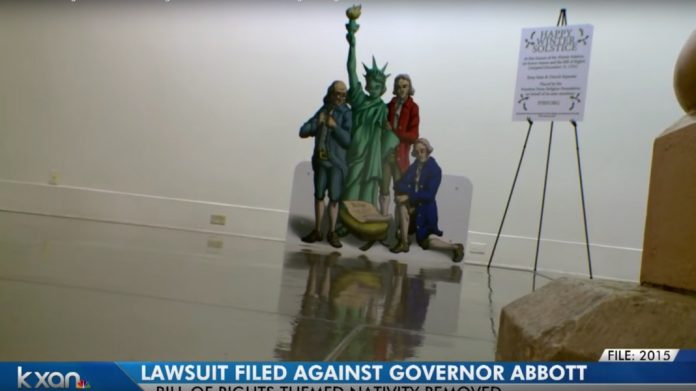 They say it supports “separation of church and state” even though that is nowhere to be found in the Constitution.

But these Radical atheists just made a mockery of the birth of Jesus with this display.

On an Illinois courthouse lawn, a “secular nativity scene” was put up by the Freedom From Religion Foundation.

The scene by the FFRF depicts Benjamin Franklin, Thomas Jefferson and George Washington watching the Bill of Rights in a manger.

This comes after the atheist group threatened a lawsuit with the county back in 2013, demanding that they take down the Christian nativity scene.

An atheist group has placed a secular nativity scene honoring the “baby Bill of Rights” on an Illinois courthouse lawn to counter the traditional Jesus-centered nativity scene.

The secular scene, sponsored by the Freedom From Religion Foundation (FFRF), shows cutouts depicting Benjamin Franklin, Thomas Jefferson and George Washington “gazing adoringly” at the “baby” Bill of Rights in a manger, according to a news release from the organization. The Statue of Liberty is part of the display, too.

A sign accompanying the display reads, “Happy Winter Solstice. At this Season of the Winter Solstice, we honor reason and the Bill of Rights (adopted Dec. 15, 1791).” The bottom of the sign reads, “Keep State & Church Separate.”

The sign was placed on the Grundy County Courthouse lawn by FFRF members, three years after the county made the space available to other religions and non-religions. FFRF sent a letter to the county in 2013, threatening a lawsuit if the traditional nativity — with the baby Jesus — either wasn’t removed or was paired with other displays. The nativity is owned by the Morris Ministerial Association, according to the Morris Herald News. The secular scene was placed on the lawn in past years, too.

The FFRF says the display “exemplifies the take-charge spirit of members of the freethought organization.”

They don’t care about protecting the “freedoms” for all Americans like they claim.

This is how they wage war with the people they can’t stand the most: Christians.

They threaten and fear monger Christians until they get their way.

They specifically target and threaten Christian conservatives hoping to see the day Christianity is persecuted into extinction.

Do you think a real nativity scene should be allowed on a courthouse lawn? Let us know in the comments below.