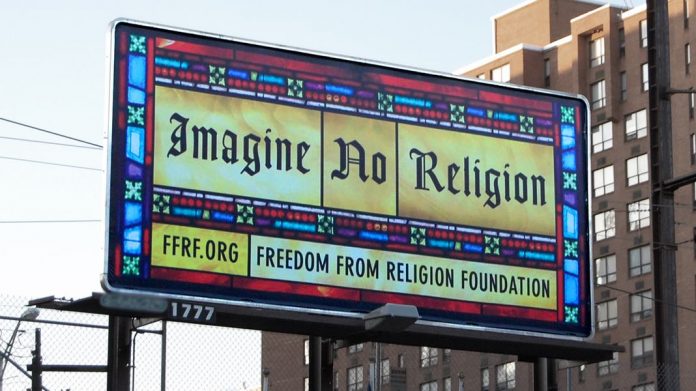 Atheists want to make a mockery of the Christmas season.

They think the most important event in human history – the birth of Jesus – is a joke.

And a display this atheist group put up will infuriate you.

The Freedom From Religion Foundation is notorious for their attacks on anything remotely Christian.

And now they’ve put up digital billboards in Atlanta, Georgia that promote the secular Winter Solstice as the “real reason for the season.”

One of the billboards is even located on interstate 75 for millions to see.

An atheist group has launched a series of holiday-themed “Winter Solstice” billboards in Atlanta to underscore what it sees as the “real reason for the season.”

The two digital billboards sponsored by the Freedom From Religion Foundation show a snowy forest with the message: “At This Season of the Winter’s Solstice May Reason Prevail.” It then includes the group’s web address: FFRF.org.

According to a news release, one digital billboard is located on Interstate 75, the other on Spring Road.

“FFRF points out that the real reason for the season is the Winter Solstice, taking place on Dec. 21 this year — the shortest, darkest day of the year,” the news release says. “The Winter Solstice has been celebrated for millennia in the Northern Hemisphere because it signals the rebirth of the sun and the continuation of life.”

A third billboard went up on Peachtree Independent Boulevard. It reads: “Supernatural Belief — The Enemy of Humanity.”

The three billboards are part of “a year-long media campaign” in Atlanta, according to FFRF.

The Freedom From Religion Foundation thinks that celebrating the birth of Jesus is like believing in a fairy tale.

Their third billboard that reads “Supernatural Belief — The Enemy of Humanity” is what shows their problem.

FFRF, and atheists like them, can’t explain everything in the universe. And to criticize Christians who celebrate the birth of Christ as “the enemy of humanity” is sickening.

This isn’t FFRF’s first attack on Christmas this year either.

As we reported, FFRF threatened city officials in Ohio to remove a nativity scene or “face the consequences.”

The radical atheists have gone too far with their attacks on Christmas.

And Americans are sick and tired of their antics as well.

Which is exactly why millions of Americans support President Trump in his defense of keeping Christ in Christmas.