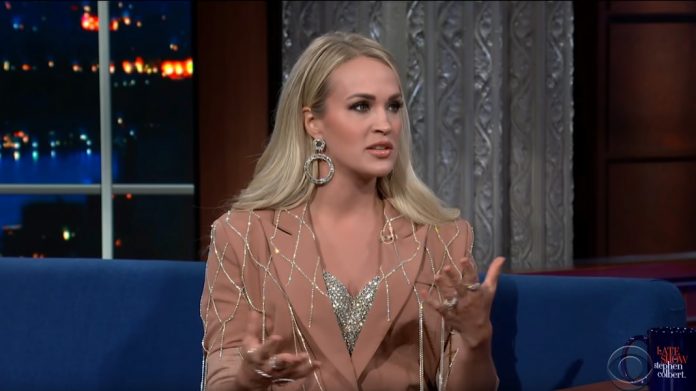 Leftists are always looking for a reason to “cancel” someone.

Even the smallest indiscretion can ruin a person’s life.

And the woke outrage mob went after a country music star for liking one message on social media.

It’s Carrie Underwood’s turn to face off against the left-wing outrage mob.

Carrie Underwood liked my video and now the mob is coming for her. She should know better than to like something that they don't like. This is an unforgivable sin. https://t.co/ksPEKrnCnT

Walsh, who has children in Nashville-area public schools, gave a school board speech railing against mask mandates for kids.

COVID has been so politicized by the establishment, leftists are fearful that their children are at serious risk from the virus when all available data say the opposite.

Here is my speech to the Nashville School Board where I spoke out against the cruel and indefensible mask mandate for children pic.twitter.com/Eq5IFsKyja

Worse yet, the efficacy of masks is dubious, and actual mask mandates don’t do anything.

The most mask-compliant countries in the world had some of the worst COVID case fatality rates.

Being considering anti-anything-the-establish-says regarding COVID has become the new Scarlet Letter.

Scientists have become high priests, but only the ones approved by the corporate-controlled press and Democrat politicians.

Well-credentialed healthcare professionals who are counter-narrative get attacked or ignored altogether.

Apparently leftists live to trawl social media for celebrities to take down for wrongthink.

Underwood is the latest cancelation target, but she certainly won’t be the last.