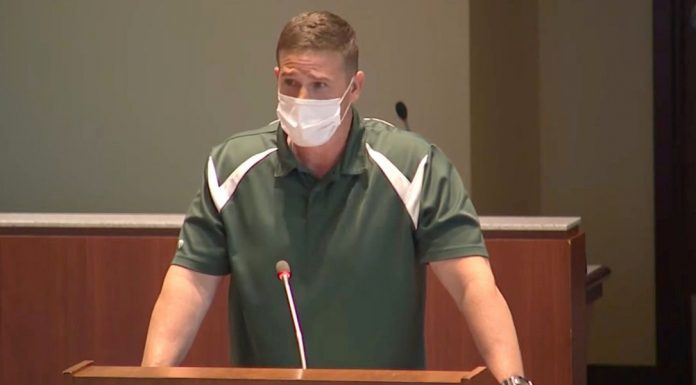 There is so much chaos and disorder in the country that it’s hard to hear the good news through the noise.

While the radical Left continues to try and tell Americans that transgenderism is normal and Critical Race Theory curriculum is necessary for education, there are some good guys out there quietly winning battles.

Case in point, the Virginia teacher who got suspended for opposing gender policy was just able to declare victory.

Byron “Tanner” Cross, a physical education teacher in the Loudoun County Public School System, first made a splash when he told the LCPS’ school board in a speech that went viral that he would not “affirm that a biological boy can be a girl and vice versa because it’s against my religion.”

Cross went on in his impassioned speech to tell the school board members that “it’s lying to a child, it’s abuse to a child, and it’s sinning against our God.”

Mere days after his speech, the PE teacher was told in a letter to not come on the school’s property.

The letter was incredibly vague, but it said the school district was investigating “allegations that you engaged in conduct that has had a disruptive impact on the operations.”

Cross has won an initial battle with the Loudoun County Public Schools system in what can only be described as a win for the good guys.

In a letter, Judge James E. Plowman of the Twelfth Circuit ordered LCPS to restore Cross’s position as a PE teacher at Leesburg Elementary School.

The temporary injunction ordered by Judge Plowman allows Cross to maintain his job until December 31, at which point it dissolves unless other orders have been put in place.

Plowman said it is very likely that Cross would succeed if his case was brought to trial, that the school district had clearly violated his First Amendment rights.

The school district tried to argue that the letter was just saying Cross got suspended because what he did caused a disruption, not because of what he said, but the judge rejected that idea.

So as the world looks like it’s spinning out of control, at least there are some small pockets of victory giving people a tiny glimmer of hope.