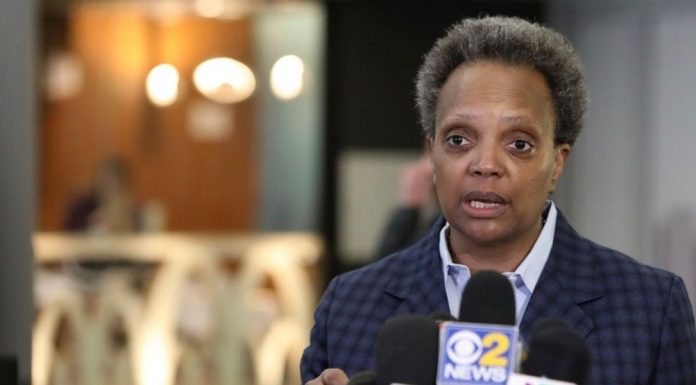 Violent crime in Chicago is at an all-time high and continuing to climb.

The city’s Democrat-run government has bowed to the woke outrage mob on issues of “reforming” the police agencies, which by all accounts has only caused an increase in crime.

But as the violent crime rate continues to rise in Chicago, Mayor Lightfoot has something else on her mind.

Reporters in the Chicago area broke the news, via social media, that the Mayor is only granting interviews to black or brown journalists.

Of course, to most with any common sense, this sniffs of racism but clearly to Lightfoot, that is not the case because she stated she is giving priority to journalists of color “temporarily.”

How this in any way benefits the crime-ridden city of Chicago is anyone’s guess, but the left-wing Mayor seems to think it is an important move on her part as she watches her city crumble around her.

Several journalists from the Chicago area took to Twitter to let the public know that if they’re white, they are not allowed to interview the Mayor at this time.

One journalist, Mary Ann Ahern of NCB5 Chicago, tweeted, “As @chicagomayor reaches her two-year midway point as mayor, her spokeswoman says Lightfoot is granting 1 on 1 interviews – only to Black or Brown journalists.”

Chicago reporter Heather Cherone and anchor of WTTW Chicago Tonight, Paris Schutz, both replied to the tweet by Ahern confirming her statement to be true.

Lightfoot confirmed the information saying she “prioritizing media requests from POC reporters on the occasion of the two-year anniversary” of her inauguration as Mayor.

The Mayor also tweeted that she “ran to break the status quo that was failing so many” and that it’s “a shame that in 2021, the City Hall press corps is overwhelmingly white.”

This is just another outrageous hair-brained idea by a leftist who does nothing more than cause even greater racial tension.

Giving preferential treatment to certain reporters based solely on race will not help advance their cause or fix the problem of racism.

The Left is doing precisely what they are screaming about the Right doing, showing preference to someone not based on merit or ability but on the color of their skin.

Didn’t Lightfoot’s ancestors fight against these types of things?

It is colorblind to believe you are doing any good for your cause by elevating one race over another.

Joe Kent, who is running for Congress in Washington, along with Lavern Spicer, a candidate for Congress in Florida, both spoke out against Lightfoot, calling her actions racist.

Which there is no doubt they are.

If America didn’t already believe the Left had lost their minds, this has to prove that they truly have no desire to unite the American people.

The only thing liberals like Lori Lightfoot want is total and complete control.