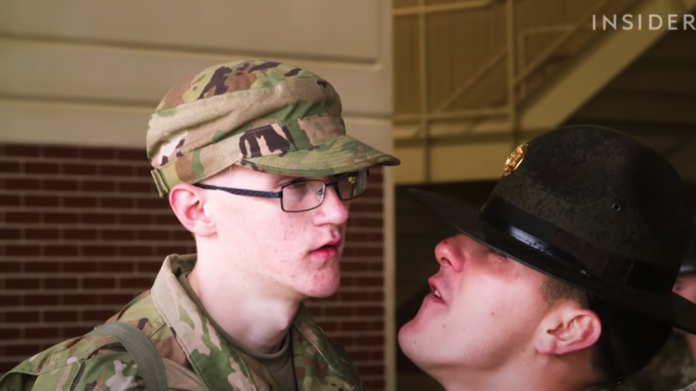 Members of the U.S. Army, like all of the branches of the military, take an oath to protect and defend the constitution.

But now it seems that oath may not apply to the armed services themselves, or at least one branch in particular.

Because the U.S. Army just launched a strike against Christians and the First Amendment for this strange reason.

The last verse of the U.S. Army’s song is:

Men in rags, men who froze,
Still that Army met its foes,
And the Army went rolling along.
Faith in God, then we’re right,
And we’ll fight with all our might,
As the Army keeps rolling along.

Based on the Army’s recent actions against two of their Chaplains, it’s no wonder they cut the song short and no longer sing this verse.

After all we wouldn’t want the Army mentioning God or stating they will “fight with all their might.”

Because in this case, neither apply.

The reason they were removed was in response to a complaint from the Military Religious Freedom Foundation after its founder and president Mikey Weinstein sent a “demand letter” claiming the Army was violating the Establishment Clause of the First Amendment.

One of the so-called “violations” consisted of Smith talking about the Fort Drum Spiritual Fitness Trail in one of the videos.

“This trail is designed to be used as a prayer walk, to walk around to all the different stations,” she said.

In another video, Captain Smith encouraged people to visit the Fort Drum Labyrinth as a great place to hear God’s voice.

“It’s going to feel like you are walking in circles. But sometimes in life, that’s what it can feel like,” she said.

As for Major Ingram, MRFF complained his videos “are nothing short of Christian sermons.”

In the videos, Major Ingram cited 1 Corinthians 13, the chapter written by the Apostle Paul about love.

“When we think of biblical faith, many think it is some kind of magical thinking or not rooted in reality, but I assure you it is not,” he said.

“God encourages us not to be dismayed by what we see around us, things we cannot control. We can, however, with the best intel in this moment, place our trust in him, walk forward in his strength and treat others with kindness.”

According to MRFF, these two chaplains were “trying to capitalize on fears and anxieties, and the large audience of their units’ Facebook pages, to push their religion.”

And, because of the complaint by a small, well known troll organization, the U.S. Army backed down faster than the Union Army’s retreat from the First Battle of Manassas.

Then again, are we supposed to be shocked by this?

In recent years the U.S. Military has been turned in to a large test subject for liberal psychologists, rather than the proud fighting force it once was.

Mike Berry, a lawyer at the First Liberty Institute told Fox News, “At a time when our nation is hurting and many feel hopeless, why on earth would Mikey Weinstein attack prayer?”

“I cannot believe the legendary U.S. Army’s 10th Mountain Division raised the white flag of surrender to an anti-religious freedom zealot. Every president, from Washington to Trump, has publicly prayed for our military. If the commander in chief can pray, then our soldiers can, too.”

If it were up to the Military Religious Freedom Foundation, Christian American service men and women would never be allowed to openly worship God or pray.