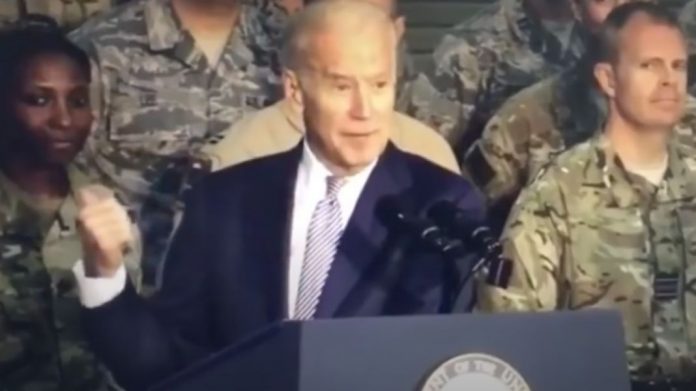 Many have watched in disbelief at the scenes we are witnessing coming out of Afghanistan.

But the Biden Administration has made it clear that they could care less.

And now the The Taliban is taunting our brave soldiers and you have to see it to believe it.

Every day now a new story comes out of Afghanistan that you just won’t believe.

For instance, just a couple days ago the Taliban told the Biden Administration to go take a hike after demanding that we leave the nation by August 31.

Rather than showing them who the hell they are talking too with some B-52s, the Biden Administration gladly went with their demands, even if not every American will be safely out by the Taliban-imposed deadline.

But that’s not the most humiliating thing that has happened to our nation this week in Afghanistan.

We all know the famous patriotic picture of a band of marines hoisting up the Stars and Stripes above Iwo Jima in what many at the time thought would be impossible to achieve.

In the battle for Iwo Jima, over 6,000 United States service members died fighting off the Japanese.

Well, the Taliban decided to recreate their own Iwo Jima picture in an insult to our nation.

All while in gear provided by the United States tax payer, the Taliban posted the picture on television for all to see.

▪️#Talibans, dressed up in American military gear, mocked #US by recreating what seems like the famous World War II photo of US Marines raising the flag on the island of Iwo Jima. pic.twitter.com/51ljT0el56

Sad thing is the United States government could care less about it.

We lost many of our sons and daughters fighting the Taliban for 20 years, and now they mock us with gear we gave them for free when the Afghans we spent $80 billion training surrendered without firing a shot.

It is utterly despicable that it has come to this.

But what do you expect with Biden in charge?