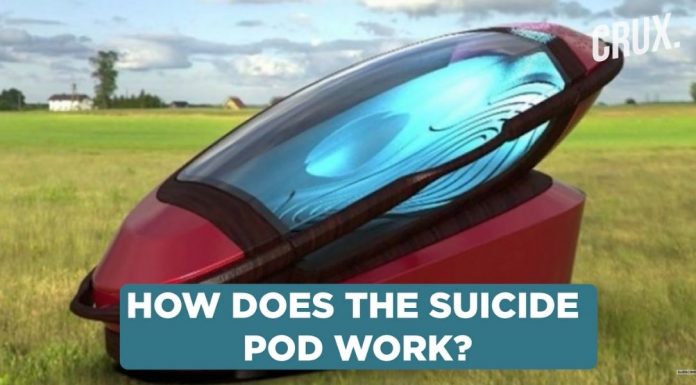 As our society goes down the drain, the stories just get more evil by the day.

And this story could be the worst story of the year and it shows just how far society has fallen in recent years.

Because the Swiss just approved this travel pod and it may as well be this century’s version of a German boxcar.

For the Swiss, the slow, agonizing suicide of substance abuse is apparently not a good clean way to go.

That’s true for anyone.

And while you’d hope everyone would recommend the natural route of old age, Switzerland is instead now promoting their new and painless travel suicide pods.

It isn’t a coincidence that when Roman society started its infamous collapse into the ash-heap of history, the worst of man came to the forefront of society.

Because when there is a void where sanity once was, it is often filled with darkness.

And we are seeing this play out in real-time before our eyes.

If it’s been over the past five years, or five minutes; it probably serves as proof that our current society is in a downward spiral.

For instance, drag queen story time for preschoolers isn’t the result of a thriving society.

Drag Queen story time for children at the public library in Houston, Texas. Very Dangerous. Do you think this is ok to expose to Children? pic.twitter.com/7Af1OKy41M

Our nation is overrun with weak men.

As a result, the despotic and the dementia-addled, like Anthony Fauci and Joe Biden, rule.

Weak feeble leaders make for a weak and feeble nation.

And we’ve certainly become that if that’s who’s ruling.

To add more negativity in our world, we have all had to endure the biggest stint of tyrannical rule in our society’s history over government officials’ thirsts for power during COVID.

So this next story is either a continuation of the downfall of society or just the outcome.

The Swiss medical review board approved the use of a new suicide capsule called the “Sarco.”

The Sarco looks like something out of a sci fi horror film.

But in reality, it may as well be this century’s version of a German boxcar heading for the death camps.

As a business pitch, the Sarco’s makers touts its ability to kill inhabitants in under a minute with just the ease of clicking a button.

It does so by decreasing the level of oxygens in the pod and injecting nitrogen.

The makers of the pod claim that the person will “be prompted to answer a series of questions before being presented with a button that will bring the oxygen level inside the tank down to a dangerously low level.”

And just in case someone wants to die out in the open wilderness the pod can be towed behind most vehicles.

Its pitched as being able to put the inhabitant in “an idyllic outdoor setting or in the premises of an assisted-suicide organization.”

#Gravitas | Switzerland has legalised a 'Suicide Machine'. The device promises a 'painless death' within a minute. Assisted Suicide has been legal in the country since 1942. The 'Sarco Pod' is aimed at making the process easier. @palkisu has a report.#SuicideMachine pic.twitter.com/z8rM11xf2r

If this isn’t the ultimate sign of the pit of hell Western Society has reverted to, then God only knows what is.

What’s not in doubt, is the feeble elderly leaders running the world need to see their pandemic despotism meet an early death.

Because this is what that’s all leading to.

Get help if you need it. And the best way to do that may be to become the help the world needs.