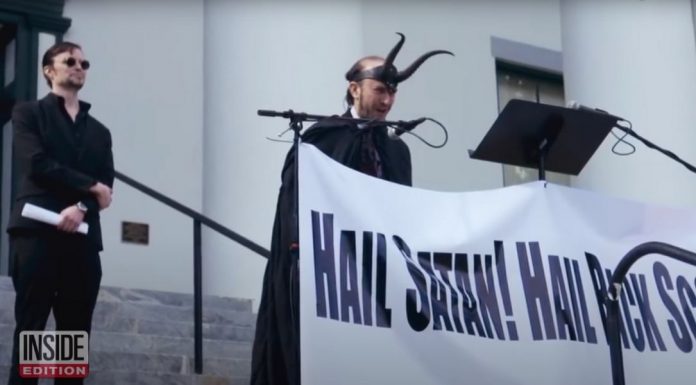 Leftists don’t know what to do other than act out when things don’t go their way.

But their complete meltdowns are taking darker and darker turns.

Now the Satanic Temple has admitted “incest and rape” are their top targeting criteria for this one demonic plan.

With the increasing possibility that Roe v. Wade will be overturned this summer, leftists are trying to find any way to save their right to kill a baby in the womb.

Well the Satanic Temple is ready to fight any state pro-life legislation as they openly admit to doing this ritual.

One of the big questions heading into this Supreme Court session is if the conservative justices have the balls to do what so many in the Republican Party have been promising, an overturn of Roe v. Wade.

Well, last week a draft opinion of the Court was leaked which shows Roe and Casey being overturned.

This is a dream come try for the pro-life movement.

But as expected, the Left have gone completely insane because of this leaked opinion.

And many on the Left are going back to the one thing they know best: they are creating violence against those that disagree with them.

They are going nuts over the fact that they believe women will lose the right to kill their child in the womb.

Well, leave it to Satan worshipers to lead the charge against stopping the murder of babies.

The Satanic Temple states that they are ready to fight for the right to kill babies, otherwise known as abortion, because it is a religious ritual.

In a statement, the Satan worshipers claimed, “In states that outlaw abortion but grant exceptions for instances of incest and rape, members should be permitted a religious exception to perform TST’s religious abortion ritual.”

The statement continued, “States that outlaw abortion and do not grant exceptions present more significant challenges, but TST has a number of plans that we will be undertaking quite soon.”

And their plan is to take it to the courts.

The Body is Inviolable
Subject to One's Own Will Alone. https://t.co/TeyVxENu45 pic.twitter.com/kuNd1mCYKd

You know you are in good company when the church of Satan is on your side.