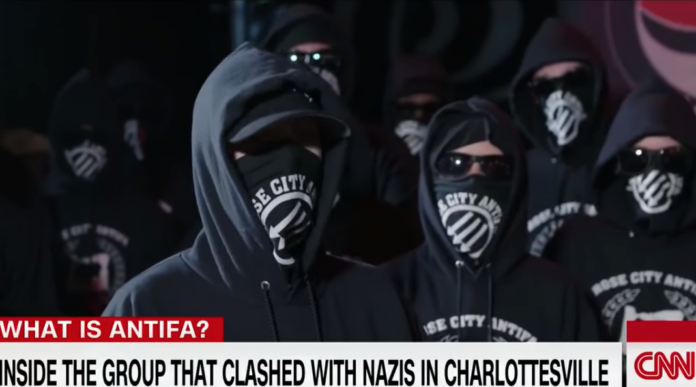 Incidents of violence against hard-working Americans is becoming an everyday occurrence.

From college campuses to the streets and highways of America, it’s becoming unsafe to be a conservative.

And innocent Americans are now under assault as the radical Left is turning increasingly violent as these shocking incidents show.

Politics in America has largely been a peaceful battle between two, or three competing philosophies.

Sure, there were a few duels in the 19th Century and one could argue even one war.

But for the most part, in the 20th and 21st centuries, politics and governing has been done through the ballot, not the bullet.

Since the election of Donald Trump in 2016, that seems to be changing.

Just this past week we saw a 34-year-old Antifa supporter arrested for assaulting a 15-year-old who committed the “crime” of wearing a MAGA hat.

There were more Antifa riots in Portland, where police informed innocent bystanders they were on their own. In one case, police watched from a distance as Antifa thugs attacked a reporter.

And on college campuses it’s becoming dangerous to even be a Republican.

Just a few days ago a video surfaced of radical leftists attacking and destroying a College Republican table at UC Santa Cruz in California, spitting on an American flag and threatening students who dared to be exercising their first amendment rights.

And in New York City, the policies of leftist Mayor Bill DeBlasio have left the police helpless, even as thugs attack cops, destroy police cars, and beat up innocent people.

Unfortunately, these attacks are becoming all too frequent and some believe it is part of a concerted and organized effort by the Left.

It has long been a socialist tactic to use violence and intimidation to try and shut down free speech that they don’t like.

Many political observers believe this violence and destruction is one prong in the socialists’ effort to take over the country and impose their failed philosophy on America.

The situation in Portland is a perfect example of how the fascist thugs known as Antifa use violence to claim that things are out of control.

The police are forced to retreat, and watch things go bad from a distance due to liberal politicians in charge of the city.

Then when things get too bad, they pass more laws and ordinances to strip away the rights of all citizens.

Meanwhile the liberal media ignores the attacks, and in fact on more than one occasion have been complicit in attacks by promoting the thugs that perpetrate them.

And the media joins with liberal politicians in promoting lawlessness by ignoring laws they don’t like and defending the lawless acts of illegal immigrants, gang members, and so-called activists who run rampant in major American cities.

But this lawlessness is not limited to liberal bastions like New York City and Portland.

Recently a retired police officer was punched in the face at his 50th birthday party in Nashville.

And in Florida a van plowed through a GOP registration tent, destroying the tent and nearly running down the volunteers.

As we get closer and closer to the November elections, expect more violence, more lawlessness and even more attacks on law-abiding citizens.

Have you witnessed acts of violence or intimidation by radical Leftists?

Share your thoughts and experiences with Culture Watch News in the comments below.