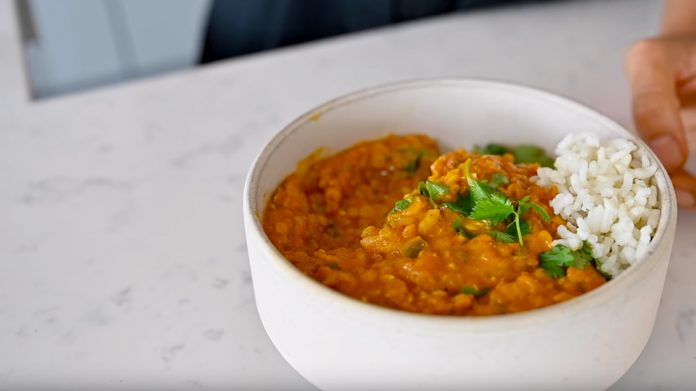 According to the “woke” mob, racism is alive and well in the aisles of your local grocery store.

From Aunt Jemima to the all-American apple pie, people across the country are supporting racism just by purchasing certain foods at the Piggly Wiggly in town.

And now the radical Left is once again attacking food for being racist, and this might be the most bizarre one yet.

In a video posted to BuzzFeed, “food blogger” Chaheti Bansal calls for canceling the word “curry.”

Surprisingly this is not a word generally associated with the United States and often conjures up thoughts of Southeast Asian culture.

But, not so fast because Bansal has dug so deep, she has found the link between curry and white, Christian supremacy.

I mean, is something really racist if it can’t be traced to Christianity somehow?

According to Bansal, the word curry is believed to be an anglicized – aka made more English sounding – interpretation of the Tamil word “Kari.”

So, clearly, since the original word, according to this scholarly “food blogger,” was twisted to sound more English, that makes it racist.

And this 27-year-old “food expert” isn’t the only one griping over the word curry and its racist nature.

Ilyse R. Morgenstein Fuerst is an Associate Professor of Religious Studies at the University of Vermont, which clearly makes her a food expert too.

Fuerst says that the word is rooted in “white, Christian supremacy” because, to her knowledge, the word curry doesn’t actually exist in any South Asian language and is a word that most historians attribute to a “British bad ear.”

The religious studies professor claims that Indians catered to the palates of European colonizers.

“They wanted food that was spiced, but not too much. Fragrant, but not smelly,” Fuerst declared.

She continued, “And that lack of temperance, in our food, or in our emotionality, is a problem. That’s one of the things that is rooted in white, Christian supremacy.”

Ah, okay, so a lack of “temperance” in food is rooted in “white, Christian supremacy,” so that’s why curry is racist.

The woke mob is digging deep on this one.

Be sure to note that it’s not just “white supremacy” anymore – now it’s “white, Christian supremacy.”

Of course, later on, the famous “food blogger” who started this mess admitted that you can’t totally cancel the word curry because indigenous people still use the word.

Not surprisingly, the video on BuzzFeed has gone viral, and people worldwide have something to say about the stupidity of these statements.

Especially our friends across the pond in Britain.

British comedian Leo Kearse said, “What’s racist today? Today, the word ‘curry’ is racist, and we’re all going to have to stop using it because some blogger is crying about it.”

Even Indian chef and owner of Café Spice Namaste in London, Cyrus Todiwala, said he doesn’t consider the term curry racist and believes it was nothing more than a result of the Indian chefs failing to properly educate people in Britain.

Whatever the case may be, liberals are crying and claiming racism. Therefore, in their eyes, the food must be done away with, and white Christians must be blamed.

If it triggers a leftist, it must be racist.