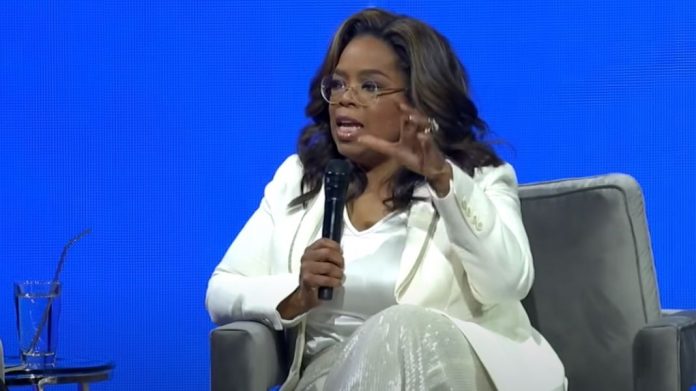 Despite making billions throughout her career, Oprah Winfrey loves to play the victim.

She constantly goes after white people, claiming they are somehow oppressing her.

And the racist thing she just said about white people will infuriate you.

There are few American success stories quite like Oprah Winfrey’s.

From humble beginnings, she created a massive media empire, and amassed over $2 billion in the process.

One would think that with her being a black woman, this would prove that anybody can find success in America if they work hard, regardless of their race.

But this doesn’t fit with the modern day race-baiting of the Left, who claim that race is the biggest issue of our day, with the color of somebody’s skin deciding their destiny.

They believe that being born white grants some sort of “privilege,” and that a black person has a harder time moving up in life than a white person for that reason.

This leaves out the fact that there are more poor white people in the United States than black people, and that there are programs in place, like affirmative action, that created actual systematic advantages to minorities for no reason besides their skin color.

But to Oprah Winfrey, none of that matters, and all the success white people come from is from their “whiteness,” which is something she seems to believe they should be ashamed of.

In her new series, titled The Oprah Conversation, she went on about this in a condescending tone.

She begins by comparing the racial structure in the United States to the “caste system,” which is used in India, which places people in economic categories before they are born.

“There are white people who are not as powerful as the system of white people, the caste system that’s been put in place,” she began. “But they still, no matter where they are on the rung, or the ladder of success, they still have their whiteness.”

“[Whites have a] leg up,” she continued. “You still have your whiteness. That’s what the term ‘white privilege’ is. It means that whiteness still gives you an advantage, no matter.”

The entire idea of “white privilege” is racist.

But it is all that the race-baiters have to target in modern America.

No other country has done more to atone for the sins of racism than the United States, which has resulted in it becoming perhaps the least racist country in the entire world.

But there is big money to be made in racial politics, and Oprah Winfrey isn’t giving up her chance to cash in.