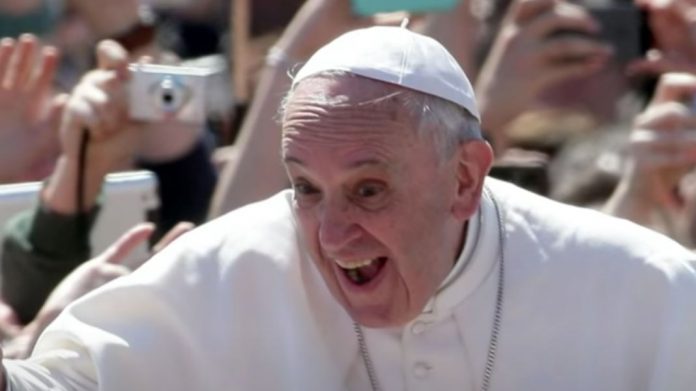 The Pope has made a number of head-scratching moves.

His willingness to spout leftist propaganda has endeared him to some on the Left who are otherwise hostile toward religion.

And the Pope just made one shocking statement during a North American trip.

Pope Francis visited Canada and made a jaw-dropping statement along the way.

The Pope said that the European colonization of Canada resulted in a “genocide” against indigenous peoples.

A reporter asked Pope Francis, “You know that the Canadian Truth and Reconciliation Commission described the residential school system as ‘cultural genocide,’ and then it was modified as genocide. The people who heard your words of apology this past week expressed their disappointment because the word genocide was not used. Would you use that term to say that members of the Church participated in genocide?”

The Left have used colonialism as a four-letter against western civilization writ large.

They use the brutality people experienced during the colonial era as a justification for taking more power and tearing down society completely in order to begin anew.

As horrific as colonization was in many aspects, no one was innocent.

Left-wing critics ignore the fact that indigenous societies colonized and oppressed each other as well as committing their own atrocities against colonial settlers.

Tribes conquered one other, engaged in animal and human sacrifice, and held slaves.

In fact, the enslavement of blacks on Native American reservations did not end with the Emancipation Proclamation.

The sins of all cultures across time have been wrapped into a bow around Europeans from a particular time in history.

The Left are not concerned about the Islamic conquests of the 7th and 8th century, or the gruesome Barbary Coast slave trade.

Ironically, the Left is attempting to “colonize” children in schools into wokeness, as Pope Francis said, by “taking away children, changing culture, changing mentality, changing traditions.”

That’s the colonization that people need to be concerned about.