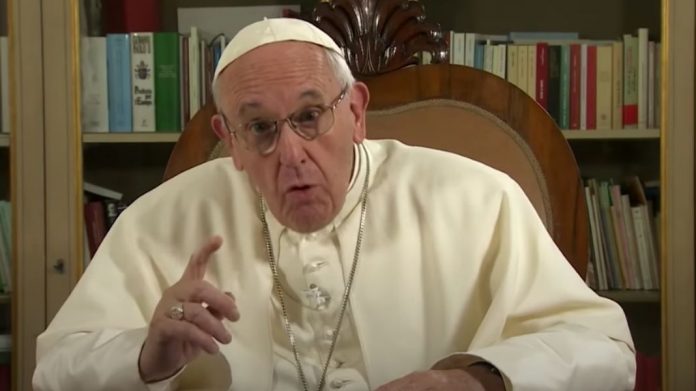 Joe Biden continues to call himself a Catholic despite his clear support of abortion, which flies in the face of the church’s teachings.

The Biden administration mouthpiece had a devil of a time deflecting abortion questions ahead of Biden’s Vatican visit.

And Pope Francis gave Joe Biden a rude awakening with a message that may explain Jen Psaki’s sudden breakthrough symptoms.

Pope Francis is quickly turning into the most liberal Pope in the history of the Catholic Church, which has many wondering how deep his convictions truly run.

But you won’t believe what the Pope said just hours before meeting with abortion advocate Joe Biden.

Many believe the Pope is far more supportive of Biden’s policies than he lets on given his clearly leftist leanings.

But the Pope caught a number of people off guard when he made a statement about abortion just hours before his meeting with Biden.

Any Catholic who truly believes in the doctrine of the church will tell you that a pro-abort Catholic is an oxymoron, but Biden continues to try and play both sides of the coin.

But just hours before meeting with pro-abortion President Joe Biden, Pope Francis publicly reaffirmed the church’s teaching that the life of “every child conceived… is sacred and inviolable.”

In his weekly audience, the Pope pronounced a blessing on church bells, commissioned by a Polish pro-life group and featuring pro-life words and images.

“Today I blessed the bells bearing the name ‘The voice of the unborn.’ They are destined for Ecuador and Ukraine,” the pontiff said.

The statement’s timing came at a period when many were doubting the Pope’s commitment to the unborn given his many leftist leanings.

It was reported that the Pope and Biden were expected to discuss issues such as climate change, the fight against poverty and inequality, migration, and the COVID-19 pandemic.

In the lead up to Biden’s meeting with the Pope on Friday, White House Press Secretary Jen Psaki faced tough questions from Owen Jensen, a reporter for the Catholic network EWTN.

“The White House has said they will discuss working together on ‘efforts grounded in respect for fundamental human dignity,'” Jensen said to Psaki Wednesday. “… Will that include the human dignity of the unborn?”

“There is a great deal of agreement and overlap with the president and Pope Francis on a range of issues: poverty, combating the climate crisis, ending the COVID-19 pandemic,” Psaki answered. “These are all hugely important, impactful issues that will be the centerpiece of what their discussion is when they meet. The president has met with him. This will be their fourth meeting.”

Jensen famously made Psaki lose the leftists’ plot and go off message on “pregnant people” back in September when he raised questions about the President’s Catholic faith and abortion.

Psaki – who announced she’d tested positive for COVID on Sunday – will now likely get to avoid answering more tough questions following Biden’s by all accounts disastrous meeting with the Pope.