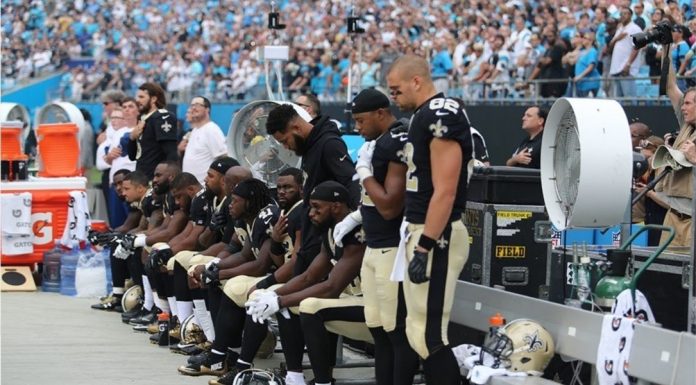 Millions of football fans were let down by anti-American anthem protests at NFL games.

But now the NFL is regretting bowing to Black Lives Matter after one poll dropped.

Football is a long American tradition.

Generations of families have passed down the pastime of watching NFL games together.

For years, at the start of these games they’ve played the national anthem, and in a show of patriotism, both teams have stood to honor the flag and the sacrifice of America’s men and women in uniform during that time.

But all of that changed when Colin Kaepernick chose to kneel during the national anthem over his belief that America is a racist country.

At first, it seemed like a non-issue – just a way for a washed up backup quarterback to gain attention.

But when President Trump pointed out how disrespectful it was, the league went all in on the protests in 2017 before it eventually faded out as fans were outraged and stopped tuning in or showing up for the games.

Following the death of George Floyd, however, the protests came back, in some cases with every player kneeling during the anthem.

And instead of holding them accountable, the NFL backed them, even promoting Black Lives Matter during games.

Unsurprisingly, this infuriated NFL fans, many of which started tuning out of games.

A new poll shows just how bad the NFL’s cowering to Black Lives Matter is affecting their bottom line.

A poll from YouGov/Yahoo News shows that activism during games drives away over three times more sports fans than it attracts.

Yahoo Sports reports, “In the wake of last summer’s social justice protests, which consumed sports for much of the second half of 2020, nearly half of all Americans changed their sports viewing habits, according to a new YouGov / Yahoo News poll. As athletes and leagues embraced a new, progressive strategy aimed at amplifying messages of social justice and political advocacy, some Americans began watching more sports, but about three times as many watched less.”

The poll shows that only 11% are watching more because of political and social messaging, while 34.5% are watching less, and 56.3% haven’t changed their viewing habits.

Yahoo Sports also reports that television ratings have declined for all major sports as a result of the social and political commentary.

It shouldn’t be surprising that people who simply want to watch sports are turned off by politics being thrown into the mix.

That is especially true when Black Lives Matter has committed intense violence nationwide, with upwards of $2 billion in damage caused by their riots last year alone, and dozens of people being killed during those riots.