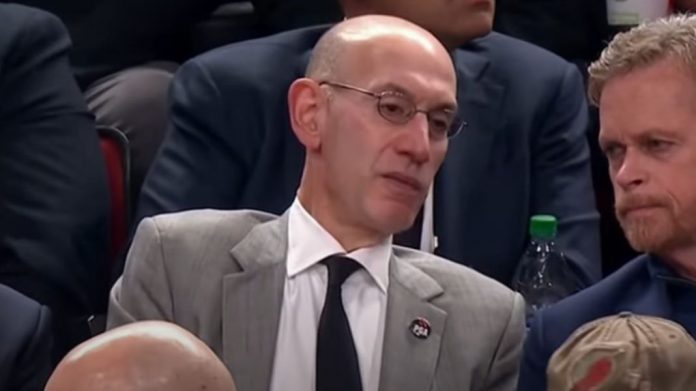 The world of sports has taken a turn for the worse by becoming political.

Some of the most vocal figures in sports politics reside in the NBA, patting themselves on the back for ripping America.

And now the NBA just caved to China in a pathetic way.

Popovich even sat for an interview with the far-left publication The Nation in order to get in even more digs at Trump.

What would the American people do without these multimillionaires “speaking truth to power”?

The reality is these NBA voices are perfectly fine taking shots at Trump because they have nothing to lose.

In fact, they’ll be rewarded.

But when real courage is required, they mysteriously lose the ability to speak.

Such is the case with the NBA’s relationship vis-à-vis China.

This was a slap in the face to the Chinese Communist Party, and they came down on the NBA like a piano falling from the sky in a Looney Tunes sketch.

The NBA immediately bent the knee, and Morey was almost fired for his tepid endorsement of Hong Kongers.

And now the NBA is groveling to China again.

NBA commissioner Adam Silver said in an interview with TIME:

“We’ve had a long history in China. and certainly, this is a bump in the road in our relations…[W]e come to China with a certain set of core American values and principles. I understand also they have a different form of government, and they have a different view how things have been done, how things should be done. Hopefully, we can find mutual respect for each other.”

What a cowardly statement.

There is no mutual respect, only a veritable show trial where the options are exile or death.

China is a country literally has over 1 million Uyghur muslims in concentration camps, forces women to undergo abortions or sterilizations, and has finally annexed Hong Kong.

Popovich was silent about the Chinese atrocities.

Kerr deflected and said America has problems with gun violence.

LeBron was the worst of the three and lectured Morey about not being educated.

Calling out China for their human rights violations with money on the line is completely different.

Since LeBron is so “woke,” perhaps he could criticize China for barring Africans from entering a McDonalds, or speak out about the Africans who were evicted due to the coronavirus.

That’s a fight that might take a little courage.

Has the NBA forever ruined its brand by kowtowing to China?