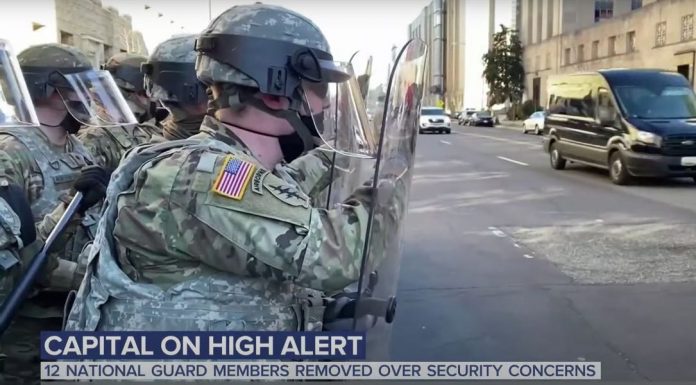 The Left never wastes a good “crisis” to attack those that they disagree with.

And lately they have been in an all out war against Trump and his allies.

But now the National Guard who protected the Capitol are the latest victims of the Left’s ruthless attacks.

As the nation witnessed the Capitol riots, leftists witnessed an opportunity.

And they didn’t waste a minute before they went on the attack.

After spending the whole summer sponsoring violence and destruction through the Black Lives Matter riots, now the Left is hilariously trying to position itself as the party of law and order.

And they are attacking and slandering President Trump and his supporters for what happened at the Capitol.

But their baseless attacks haven’t stopped at just the average Trump supporter.

Now leftists have the National Guard in their cross-hairs.

Democrat Representative Steve Cohen went on CNN to blast members of the National Guard as being threats.

Without any evidence, Cohen claimed:

You know, I was thinking, the Guard is 90 some odd percent I believe male, only about 20% of white males voted for Biden. You got to figure that in the Guard which is predominately more conservative – and I see that on my social media and we know it – there’s probably not more than 25% of the people that are there protecting us who voted for [President-elect Joe Biden]. The other 75% are in the class that would be the large class of folks who might want to do something. And there were military people and police who took oaths to defend the Constitution and to protect and defend who didn’t do it, who were in the insurrection. So, it does concern me.

When even CNN’s reporter Jim Sciutto gave him the opportunity to walk back this outlandish and insulting claim Representative Cohen instead doubled down.

Cohen continued, “You draw circles of people, and in the first circle is people who were for Trump and not for Biden as far as people who would be within the zone of folks who you would be suspect of, and the suspect group is large.”

You can watch the exchange below:

Rep. Steve Cohen implies that 75% of the National Guard are in the class of people who "may want to do something" at the inauguration.

Cohen is saying that National Guard troops who voted for Trump should automatically be suspected of being threats. pic.twitter.com/6ozID4y9ry

Since Cohen’s attack on the loyalty of the National Guard who protected the Capitol and Joe Biden during his inauguration, the FBI suddenly began vetting all 25,000 guardsmen in Washington D.C. for unwanted ties.

And as of Tuesday afternoon, according to Army General Daniel Hokanson, twelve members of the National Guard were forced out of Washington D.C. due to either public comments made or alleged “extreme affiliations.”