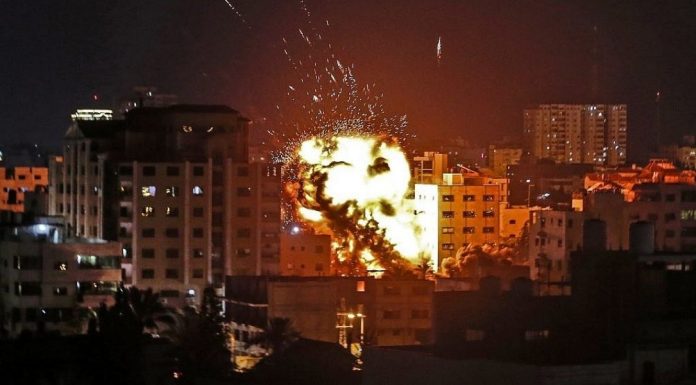 It’s been more than a decade since the world has seen a full-fledged war break out.

But with Iran attacking an Israeli ship, that could all change.

And now the Middle East is on the brink of war as Israel prepares to launch an attack on Iran.

The world hasn’t witnessed the breakout of nations at war since the United States invaded Iraq in 2003.

Ever since then, military skirmishes have popped up from time to time but no real military action between two major militaries has taken place.

But that all could change in a second with recent events in the Middle East.

And here is how it has all gone down so far.

Recently, an oil tanker was cruising along the coast of Oman in the Arabian Sea when a drone carrying heavy explosives crashed into the ship.

The end result was two dead crew members, one British and one Romanian, and the Israeli owned ship disabled off of the coast.

#BREAKING
Dryand Maritime Security website: Two dead on board the Israeli ship that was attacked in the Arabian Sea off the authority of Oman 🇮🇱🇴🇲 pic.twitter.com/XDuTKRBgiz

And according to the United States, the U.K, and Israel, all signs point to the sophisticated attack being committed directly by Iran.

The timing couldn’t be any worse for a region on the brink of war as this is Israel’s Prime Minister Naftali Bennett first test since taking office in June and he has a reputation for wanting more military intervention by Israel.

And not to mention that Iran’s new President Ebrahim Raisi was sworn in on Thursday who still needs to prove himself to the Iranian leadership in his opposition to Israel.

Now Israel’s Defense Minister, Benny Gantz, made it clear that Israel is preparing for war with Iran.

Gantz was asked by a reporter if Israel was ready for a conflict with Iran and he responded sturnly, “Yes.”

And to make matters worse, early Friday morning Israel was bombarded with missiles from Iranian backed Hezbollah out of Lebanon.

Hezbollah launched a barrage of rockets from Lebanon at northern Israel this morning.

We will not tolerate any aggression against Israeli civilians and remain prepared for any operational situation. pic.twitter.com/h37eDc10IH

This is a developing story we all need to watch as it could have huge ramifications for the rest of the world.