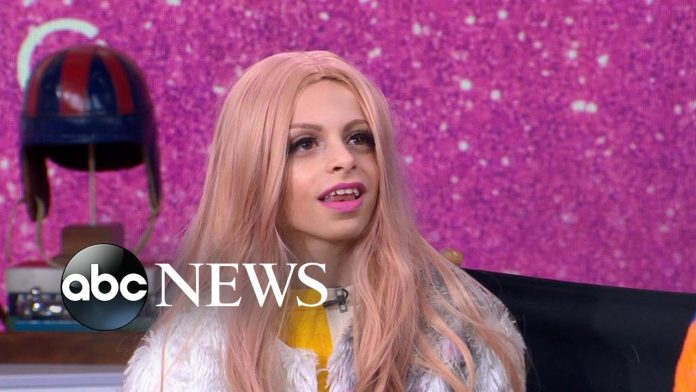 The left has been on a propaganda campaign promoting unscientific notions of gender.

They want everyone to believe the lie that there are infinite genders on a sliding scale.

But the left’s latest LGBT posterboy for their disgusting PR campaign just revealed their true colors.

The left is beginning to weaponize children in the war on culture.

Then Desmond got a “performance” gig dancing at a gay bar, where patrons threw cash at him, that made national headlines.

The liberal media sung their praises, advocating the “tolerance” of children such as Desmond.

Now, CNBC just made the child the posterboy of the left’s grotesque LGBT campaign in a new video.

CNBC, which is owned by NBC Universal News Group, showcased the child as an “LGBTQ youth” advocate. “This 11-year-old drag kid is using his voice to encourage LGBTQ youth to be themselves,” reads the media company’s caption to the video.

In December, the 11-year-old boy, dressed in full-drag as a Gwen Stefani-lookalike, danced on stage at a gay bar in Brooklyn, New York, called 3 Dollar Bill. As he took off his coat and revealed his outfit, he bounced around onstage to No Doubt’s “Like a Girl”; cheering grown men were handing him single dollar bills, as you might see in a strip club.
…
As previously reported by The Daily Wire, Desmond was promoted by NBC’s TODAY Show in June. “Meet the 10-year-old ‘drag kid’ taking over social media with inspiring message,” reads the caption video on Desmond. Left-wing site The Daily Beast gushed over Desmond’s drag and his progressive parents in a disturbing piece from February titled, “RuPaul Loves ‘Drag Kid’ Desmond. You Will Too. Fiercely.” The young child has been relentlessly praised and promoted by drag queen RuPaul, the host of VH1’s RuPaul’s Drag Race. When Desmond was just seven years old, he was featured in a music video for Season Six winner of RuPaul’s Drag Race Jinkx Monsoon. In the video, Desmond dances on top of a bar in a red dress, long gloves, and jewelry. As an 8-year-old, the child was introduced on a NYC stage in full-drag by actor Tituss Burgess.

The left’s weaponization of a child for their propaganda campaign is sickening.

But it doesn’t stop there. As we previously reported, LGBT activists in Britain were caught loading autistic kids with gender-bending drugs after telling them they weren’t the gender they were born with.

Sadly, many parents these days see themselves as LGBT activists first and parents second.

So they see no issue with using their child as a pawn to virtue signal to their “progressive” friends.

Do you think the left has gone too far? Let us know your thoughts in the comments below