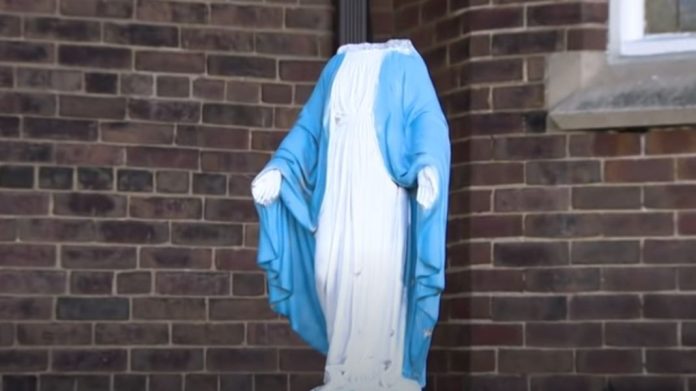 For decades, the Left has been attacking Christianity.

It has only gotten worse with the rise of Black Lives Matter violence.

And the Left’s war on Christianity just accelerated with an attack that will turn your stomach.

Left-wing attacks on faithful Christians is nothing new.

Believing in the sanctity of life, and the traditional family unit is enough to be labeled a bigot and make you a target of violence.

But in the past, this fight was largely through words.

That has all changed since the start of the Black Lives Matter riots following the death of George Floyd.

In their official platform, they demand the destruction of the nuclear family unit.

And Black Lives Matter leader Shaun King has directly called for attacks on Churches that depict Jesus Christ as white.

Dozens of churches have been attacked in recent months following these calls.

And it isn’t just in the United States.

In Toronto, Canada, churchgoers were horrified to find a statue of the Blessed Virgin Mary in front of Our Lady of Lebanon decapitated.

“Sunday August 30th, 2020, before we started our Masses at Our Lady of Lebanon church Toronto, we were shocked to discover a horrible act of vandalism: We found that the statue of the Virgin Mary, erected in front of the church, was completely decapitated!” the church said in a statement.

“We couldn’t find the head anywhere near the statue…Our parishioners, when exiting the church, were horrified to see such a deplorable and malicious act.”

Police looked into the incident and found that it occurred just after 3:00 AM that Sunday morning, releasing a description of the suspect.

“The suspect is described as 5’11”- 6’1”, thin build, long dark swept back hair, and clean shaven. He was wearing a black t-shirt with a large white design on the front, a thin red vest over the t-shirt, beige shorts and dark Birkenstock-style sandals,” the police description reads.

But while they are looking into it, they are only investigating it as a case of “mischief,” not as a hate crime.

This attack was clearly committed as an attack on the religious beliefs of those attending the church.

It is as clear-cut of a hate crime as one could find.

But in Canada, Christians don’t fit the standard bill of people that can have hate crimes committed against.

Culture Watch News will keep you updated with new developments in this story.