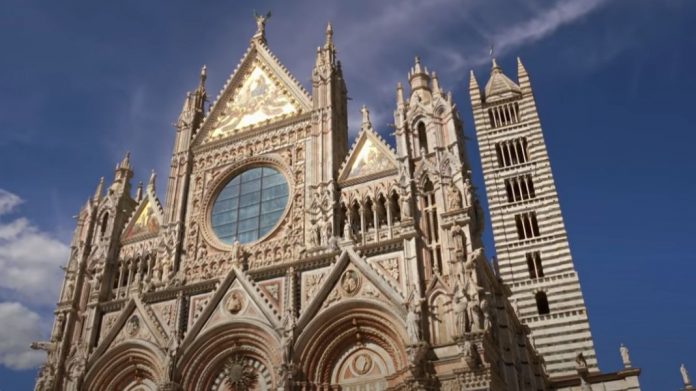 For centuries, the Catholic Church has been the biggest threat to left-wing authoritarianism.

That’s why liberals spend so much time trying to take them down.

And the Left just ramped up their war on the Catholic Church with an unbelievable attack.

The Left’s insane ideas can only truly take hold in a Godless society.

True believers in the Word of God standing together is the best way to stop that from happening.

So it isn’t surprising that the Left has waged all-out war on churches, targeting Catholic Churches in particular.

In Canada, that war has moved from being one of words, to one of all-out physical attacks.

For the past few weeks, Catholic churches across Canada have been set ablaze.

The string of arson cases began following the discovery of unmarked graves at now-closed indigenous residential schools once run by the Church.

As the fires continue to rage on, high-profile left-wing figures have been fanning the flames.

Harsha Walia, executive director of the British Columbia Civil Liberties Association, openly called for violence against Catholic parishes, tweeting “Burn it all down” during the height of the arson spree.

After she faced backlash, a high-profile Canadian lawyer went to bat for her, along with defending anybody charged with arson.

“It’s sad what’s happening to [Harsha Walia]. But let me be clear, I would help her burn it all down. And that would light our way forward. And also, I would help defend anyone charged with arson if they actually did burn things.”

While these statements should horrify Catholics everywhere, they are from people with no direct government power.

The most horrifying development out of Canada is that government officials are now pushing anti-Catholic bigotry.

Kenny Bell, the mayor of Iqaluit, the capital of the Canadian territory of Nunavut, is pushing for the Catholic Church to be taxed.

“We’re not retaliating against them; they literally killed thousands of children,” he said during an interview with Nunatsiaq News.

“Tax exemptions, as a whole, are supposed to be for groups that do the community good. It’s very clear that the Catholic Church hasn’t done the community any good,” he continued.

At a time where the Catholic Church is facing serious attacks across Canada, officials like Mayor Kenny Bell are only fanning the flames.