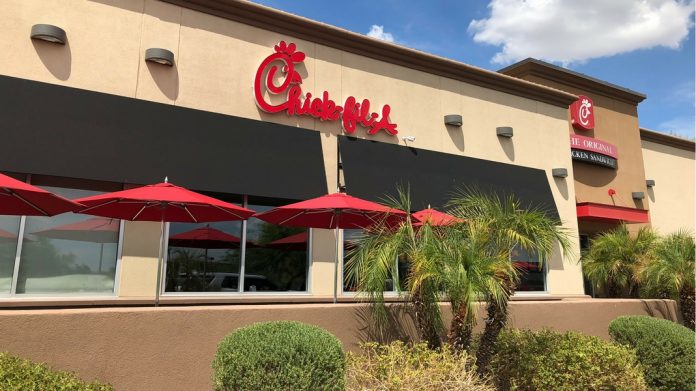 The radical Left will stop at nothing to shut down Chick-fil-A.

Being a Christian-owned business that supports Christian beliefs is not acceptable to the Left.

And they just did something disgusting to try to shut down Chick-fil-A for good.

The tasty fried chicken food chain has been a target of the Left for years, ever since it came out that the Christian owners believe that marriage is between a man and woman.

Simply having those beliefs and being successful in America is too much for the Left.

So they’ve been staging boycotts, which have been completely unsuccessful so far.

That’s why radical Leftists physically attacked a Chick-fil-A during a Pride event on Sunday in New York City.

In big black lettering, they vandalized the restaurant with the words “F*** haters,” along with duct tape X’s, and other signs.

A Manhattan Chick-fil-A was vandalized during Sunday’s Pride parade, according to photos provided to the Daily Caller.

The photos, taken of the Chick-fil-A location on 46th Street in Manhattan, show the words “F**k haters” scrawled across the windows and an “X” in red duct tape bearing the same words. There was also a small sign reading “LOVE is a terrible thing to waste” propped against the door.

Sunday, June 30, marked the end of Pride month, which culminated in the massive World Pride Parade through lower Manhattan.

Chick-fil-A has often been the target of LGBTQ activists who claim that the chain restaurant is “anti-gay” because the owners, who are Christians, support organizations that recognize marriage as a union between a man and a woman.

This is a clear escalation in their efforts to attack Chick-fil-A.
For the radical Left, vandalism is nothing new.

During many of their protests, they’ve destroyed local businesses, breaking their windows and even setting them on fire.

So while it’s simply starting with vandalism, there’s no telling where it will end.

Do you support Chick-fil-A?