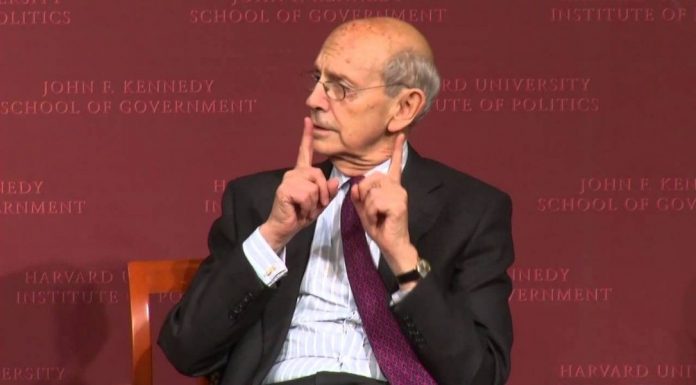 Donald Trump reshaped the Supreme Court during his time in the White House in a way that has leftists going crazy.

In fact, the new Democrat regime in government is pushing to add Justices, something many of them previously opposed before they took power, for the sole purpose of pushing their communist agenda.

And one thing that has the Left losing its mind is that they just can’t get Justice Breyer to retire.

Democrats are eager for Biden to fill Justice Stephen Breyer’s spot on the Supreme Court with another ideologically liberal justice, and they’re not being quiet about it.

But their plan appears to be backfiring because, despite their calls for him to retire and the fact that Breyer is 82-years-old, he shows no signs of stepping down.

In fact, the pressure from the Democrats seems to be doing the exact opposite of what they want it to do.

Biden was barely in office a week before the Left started pushing for Breyer to retire from his spot on the Supreme Court.

Democrats are desperate to have him replaced by a Biden pick, especially after Donald Trump appointed three justices during his term, reshaping the Court for years to come.

According to a recent New York Times article, Breyer has no plan to cave to the pressure from the Left and will not retire simply because his replacement could be appointed by a Democratic White House.

Artemus Ward, a political scientist at Northern Illinois University, stated that the pressure will most certainly have the opposite effect on Breyer. The Justice’s goal is to preserve the institutional integrity of the Supreme Court and that isn’t accomplished by stepping down because the Left wants Biden to get a pick.

“Breyer is a Justice who is with the Chief Justice in trying to protect the institution. Justices care about the Court, and the Court is arguably very vulnerable right now. This is a guy who I believe is not going to retire,” Ward told The New York Times.

Breyer himself spoke out against the pressure that has been mounting on him to retire.

In a lecture at the Harvard School of Law just last month, Breyer stated:

“My experience of more than 30 years as a judge has shown me that once men and women take the judicial oath, they take the oath to heart. They are loyal to the rule of law, not to the political party that helped to secure their appointment.”

Justice Breyer has a book coming out that pushes back against the leftist movement to politicize the Supreme Court and expand it by packing it with ideologically liberal justices.

In the book, Breyer cautions those trying to restructure the Court and tells the readers that it would only serve to “erode the public’s trust.”

Breyer believes that any type of political intervention of the Court would cause it to lose its ability to act as a check on the other branches of government.

Once again, we see the Democrats trying to rewrite history, restructure the system of government in America, and ignoring the basic principles of how the United States is supposed to be run.

Moves such as trying to remove Breyer from the Supreme Court, a decidedly liberal judge, are just a peek at how the Left plans to take complete control of the government in order to move to a communist, dictatorial style of rule.