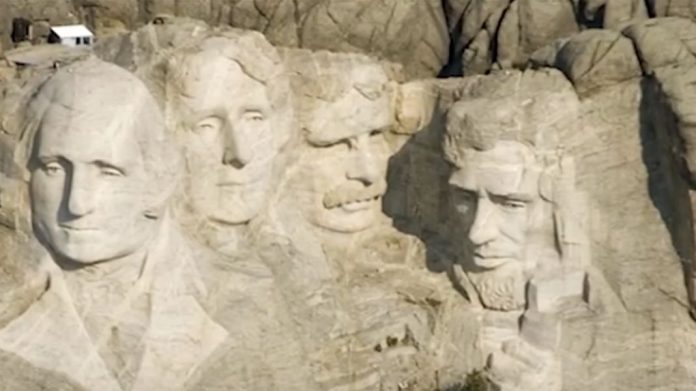 While the radical Left continues tearing down monuments across the country, they still haven’t hit their crown jewel.

There is no monument more significant to them than Mount Rushmore.

And they could blow it up after getting news they have been dreaming of.

Recent weeks have proven that no monument of American history is off limits to the radical Left.

While a few years ago they were targeting Confederate monuments, they are now zeroing in on every piece of American history.

They have already ripped down monuments to George Washington and Thomas Jefferson, and are even targeting monuments of Abraham Lincoln.

So naturally, their ultimate goal is to take down Mount Rushmore, which is perhaps the most significant monument to American greatness that exists.

Just a year ago, the idea of this monument being destroyed was unthinkable.

But things have changed so radically that nothing is off the table.

And a new poll shows that they have a lot of support in this endeavor.

Eric Kaufman, a Canadian academic and author wanted to see just how much support this would have among liberals.

So he ran a poll of liberal Americans asking a series of questions relating to changing American history.In one question, he asked if they would support a motion to, “respectfully remove the monument to four white male presidents at Mount Rushmore, as they presided over the conquest of Native people and repression of women and minorities.”

A solid majority of 58% of Americans who consider themselves “very liberal” supported the move, with 44% of “liberal” Americans agreeing.

The poll was answered by 870 Americans, and asked them 16 similar questions.

That wasn’t the only question with terrifying results.

7 in 10 liberals also supported a motion to “Move, after public consultation, to a new American constitution that better reflects our diversity as a people.”

This poll shows that the Left isn’t going to stop anytime soon with their crusade to change America to fit their warped views.

They are already winning in many cases.

But President Trump isn’t going to let this go without a fight.

He is going to be celebrating the Fourth of July at Mount Rushmore, with a massive fireworks display celebrating our nation’s Independence.

Do you think the Left will be able to destroy Mount Rushmore?