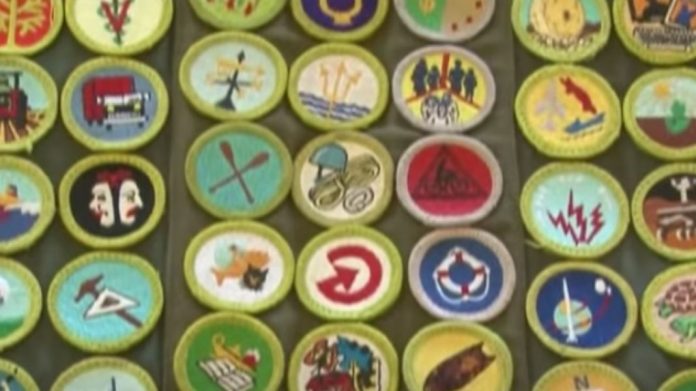 The Boy Scouts of America were once a proud, patriotic organization dedicated to helping mold boys into men.

But the last few years have seen the Boy Scouts devolve into just another left-wing social experiment causing more harm than good.

And now the Boy Scouts took a knee to the Black Lives Matter movement with their latest decision.

From its founding, the Boy Scouts was a proud, God honoring, organization dedicated to helping create strong men out of young boys.

And for decades, it was considered the premier organization for the molding and betterment of boys around the world.

But, sadly, as has happened with so many similar organizations, the leftist Social Justice Warriors have seized control and taken over.

From allowing homosexuals to take control, and allowing girls in the Boy Scouts, to banning shooting and archery, the Scouts have fallen mightily.

Now, they’ve joined in the newest national socialist cause and will take a knee to the leftists by requiring a “Diversity Badge” in order to become an Eagle Scout.

In a letter posted online earlier this week, the National Executive Committee for the Boy Scouts of America took a knee to political correctness and announced a new badge of “diversity and inclusion” to appease the national socialist, ultra-liberal, and anti-American Black Lives Matter.

The politically correct new diversity badge will become a prerequisite for any Scout to join the once elite ranks of Eagle Scout, according to the committee.

Black Lives Matter of course, is an unabashed, left-wing socialist and violent political organization, calling for the national defunding of police departments and the disruption of the nuclear family, and the very republic.

And the Scouts have decided to bow down to this organization, even though the Scouts Executive Committee claims the move is completely apolitical and only about anti-racism.

Because everyone knows, if all Scouts just get a diversity badge, racism will be over.

The letter reads in part, “We hear the anguish, feel the heartbreak, and join the country’s resolve to do better.

“The Boy Scouts of America stands with Black families and the Black community because we believe that Black Lives Matter.”

While most observers and former Scouts agree there is nothing wrong with that, the letter takes an ominous, and threatening tone, starting with a clearly false claim.

“This is not a political issue; it is a human rights issue and one we all have a duty to address.

“That is why, as an organization, we commit to introducing a specific diversity and inclusion merit badge that will be required for the rank of Eagle Scout.”

But that’s not even far enough. The letter goes on to state that the Boy Scouts of America will now require “diversity and inclusion training” for all BSA employees.

They will also begin a thorough review of all BSA property names, events, and insignia, to “build on and enhance the organization’s nearly 30-year ban on use of the Confederate flag and to ensure that symbols of oppression are not in use today or in the future.”

As if all of this weren’t bad enough, the letter ended on an ominous note by saying that these moves are only their “next steps but certainly not our last.”