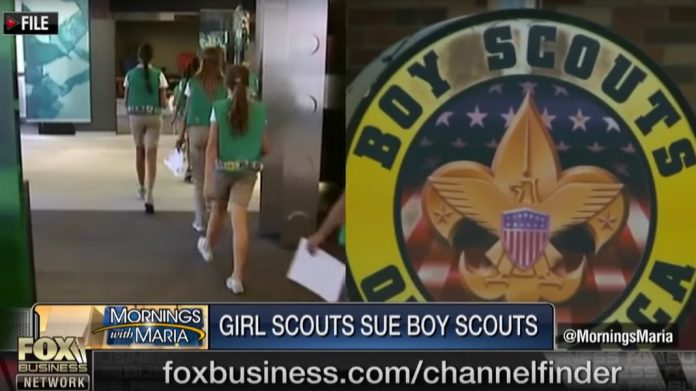 The Boy Scouts caved into the “PC Police” by changing their name to Scouts BSA and including girls.

And now they could be facing legal trouble.

The Boy Scouts was founded with the goal of turning young men into model citizens for God and country.

But when they took fire from the “PC Police” for not being gender inclusive, the organization caved into their demands.

They also changed the name of their iconic program to “Scouts BSA” instead of “Boy Scouts” and no longer called the scouts enrolled in it “Boy Scouts.”

But the Girl Scouts aren’t having it.

Girls are now joining the Boy Scouts so the Girl Scouts are losing membership.

So they are suing Boy Scouts of America over trademark infringement.

…Problems arose when “core gender distinction” was altered by the Boy Scouts of America, which announced in October 2017 it would open its doors to girls beginning in 2019.

Earlier this year, the Boy Scouts unveiled new marketing campaign to back the effort. “Scout Me In,” the tagline proclaimed.

But definitely scout the Girl Scouts out of the rebranding.

The Girl Scouts’ lawsuit said the Boy Scouts of America had no right under New York State and federal law to use words like “scouts” or “scouting” by themselves “in connection with services offered to girls, or to rebrand itself as ‘the Scouts. ’”

Now radical “progressives” are throwing science out the window and claiming there are an infinite number of genders.

The Boy Scouts was founded to teach young men how to survive in the wild, be chivalrous, good husbands, great fathers, leaders, and model citizens.

But Social Justice Warriors’ ultimate goal is to erode the so-called “patriarchy.” So they cannot allow young boys to be instilled with these honorable values.

Do you think the Boy Scouts of America should go back to being the BOY Scouts?