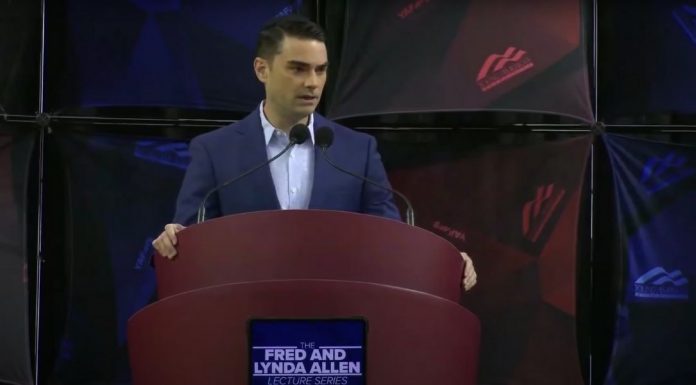 The Biden administration and Democrats have been pushing an all out woke agenda that’s put America on a path of destruction.

But one major conservative commentator may have just stumbled into a scandal that’s bigger than anyone knew.

And the Biden administration is praying no one connects the dots after Ben Shapiro destroyed one woke “mathematician and physicist” on camera.

A recent viral video moment may have unlocked a giant Biden administration scandal at the National Science Foundation.

A woke “mathematician and a physicist” aimed to shock and awe conservative commentator and Daily Wire editor emeritus Ben Shapiro with his intellectual prowess.

But Ben Shapiro schooled the student about gender after he tried to lob personal insults at Shapiro during a speech at the University of North Carolina-Greensboro.

“I’m a mathematician and a physicist here, double major,” The student said, introducing himself during a Q & A session which has since gone viral on Twitter. “And I also just won the most prestigious award in the country to pursue research at any institution I want . . . the National Science Foundation Graduate Research Fellowship. So, I think I’m pretty, you know, qualified to say that most of what you’re saying is based on like old data.”

But there’s one thing the “self-identified” genius has — and that’s confidence in spades.

He went on to claim Shapiro’s entire presentation was wrong because “gender identity disorder, that’s the DSM-4 bro, we use the DSM five now for psychologists to be able to talk.”

“I literally cited the DSM-5 in the speech, and it’s called Gender Dysphoria, which I literally I used throughout the speech,” Shapiro said.

The student then made a crass comment at which point Shapiro noted that having several small children makes it unnecessary for him to defend his masculinity.

He accused Shapiro of “using a Western colonial idea of gender.”

Shapiro had lots of fun with that one saying, “You’re right and men and women don’t exist in any other culture.”

His pointless babbling then transitioned to muttering about how he’s a mathematician and a physicist so Shapiro can’t tell him anything.

After all, Shapiro isn’t a biologist.

Then Shapiro delivered the one line that destroyed the leftist pawn’s entire game.

“As a mathematician and a physicist, what in the hell do you know about human biology?”

Shapiro said. “If your logic is so flawed as a mathematician and a physicist, I would suggest that whichever institution gave you an award, revoke it immediately.”

He may not have caught it but the student named the institution – The National Science Foundation.

You can watch the foul-mouthed scholar admit it if you missed it!

Student who says he is a mathematician/physicist gets shut down by @benshapiro: "As a mathematician and physicist, what in the hell do you know about human biology that allows you to deny it?" pic.twitter.com/KtQti2z86u

National Review hinted at an ongoing problem last year writing “In 1961, barely a decade after the creation of the National Science Foundation (NSF), the American physicist Alvin Weinberg was asking whether Big Science — big teams of scientists working on big scientific projects with big government grants and contracts — was ‘ruining science’ by transforming scientists into bureaucrats. Weinberg, then the director of Oak Ridge National Laboratory, identified three causes for concern.”

“First, large budgets do not necessarily correlate with high-quality science, and Weinberg worried that big grants would become ends in themselves. Second, large budgets inevitably produce a need for large numbers of administrative staff to help secure and manage funds. Third, Weinberg observed that pressure to win large federal grants and contracts was transforming science itself by ‘converting university professors into administrators, housekeepers, and publicists,’” National Review concluded.

The National Review was clearly right when it comes to the lack of correlation to “high-quality science.”

But it’s not bureaucracy that’s the biggest problem.

Under the Biden administration, it appears the National Science Foundation has become hell-bent on pushing out taxpayer dollars to fund “research” by the wokest of the woke.

And it’s a lot of money.

House Science, Space, and Technology Subcommittees on Investigations and Oversight and Research and Technology Ranking Member Jay Obernolte (R-Calif.) noted in a hearing last October that Congress needs to be “stewards of the nearly $45 billion that we invest every year in research at academic institutions.”

The self-styled “mathematician and physicist” that Shapiro got into it with isn’t merely another misguided leftist college student. If what he claims is true, he’s a National Science Foundation grantee, leaching off taxpayers’ dime.

Unfortunately, that incident is symptomatic of a much larger problem with hard sciences getting a woke makeover thanks to misuse of tax dollars awarded by the National Science Foundation.

According to a California professor writing for Newsweek the National Science Foundation spent nearly half a million dollars on one such study.

California State Polytechnic University professor Alex Small went through that study highlighting some of the more ridiculous arguments attempting to show white supremacy in action based on the way various students participated in class discussions.

“Robertson and Hairston find additional whiteness in one student’s ‘meritocratic’ acceptance of another student’s greater tendency to participate in class. A Hispanic female student says that she doesn’t mind another student, a Middle Eastern male, taking the lead because he seems to understand the material quite well. Indeed, she indicates that she often learns from his answers,” Small wrote. “There are arguably gender dimensions worth exploring in her acceptance of a male classmate’s dominant role, but it is hard to understand how “whiteness” manifests in one student of color trusting another student of color on the basis of his apparent expertise.”

Small also pointed out that the idea researchers are pushing that using the written word to get ahead in school is somehow “racist” is beyond ridiculous.

“It is racist and ahistorical to suggest that valuing written work somehow reinforces ‘whiteness,’” Small wrote. “Fine written works throughout history attest to the esteem that countless people, many of them decidedly non-white, have attached to writing. Indeed, light-skinned people were latecomers to literacy, a concept first developed in Egypt, Mesopotamia, the Indus Valley, China and Mexico.”

Leftists simply don’t care about the truth, character, or merit.

And Democrats know the more they can guilt the masses into avoiding thinking for fear of displaying their “whiteness” the more it benefits their own radical agenda.

The truth is the Left is absolutely set on turning citizens into mindless robots – and it’s becoming clear their number one tool to do that is the National Science Foundation.