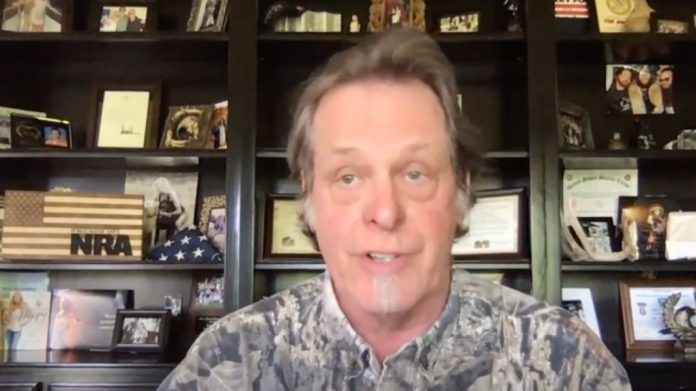 A Joe Biden Presidency will be disastrous for any freedom-loving American.

America will not look the same after four years of him in the White House.

And Ted Nugent sounded the alarm on a Biden scheme that should terrify every gun owner.

Ted Nugent has never given in to the left-wing social justice agenda prevalent in much of the music industry.

He has called out the Left for decades, making him a top enemy of the Democrat Party.

They have claimed he is a racist and an extremist, but regular everyday Americans see him as a hero for being willing to stand up.

In an interview with Breitbart Radio, he spoke directly to those people with a dire warning about the election.

He made clear that a Joe Biden Presidency would be disastrous to the Second Amendment.

He pointed at Biden, along with Kamala Harris and Robert Francis “Beto” O’Rourke who will have a lot of influence over the government if Trump loses re-election.

Afterall, Biden has already signaled that O’Rourke, who infamously declared, “Hell yes, we’re gonna take your AR-15s!” would be in his administration.

“Everybody who is paying attention knows that the left will gut the Bill of Rights to the Constitution,” Nugent said. “Actually, not gut it but just eliminate it completely. In their own words, they are coming to take your guns. Beto O’Rourke, Joe Biden, and Kamala Harris – everybody knows that they want to disarm their subjects.”

He then spoke about how a “conservative army” could stop these proposals, but adds that many have been sitting out, which is why so many gun restrictions are already on the books.

“That conservative army, way too many of them, have been sitting it out,” he said. “And that non-participation has rolled out the welcome mat for the tyrants and the Marxists. But we are turning that around right now.”

Kamala Harris may be the most dangerous figure who would be in the White House in a Biden Presidency.

Harris made gun control a central part of her presidential campaign.

She said that she would give Congress 100 days to pass sweeping gun control, and if they don’t, she would sign it into law by executive action.

So no matter what, gun control would become law under a Joe Biden presidency, which should terrify any gun owner.