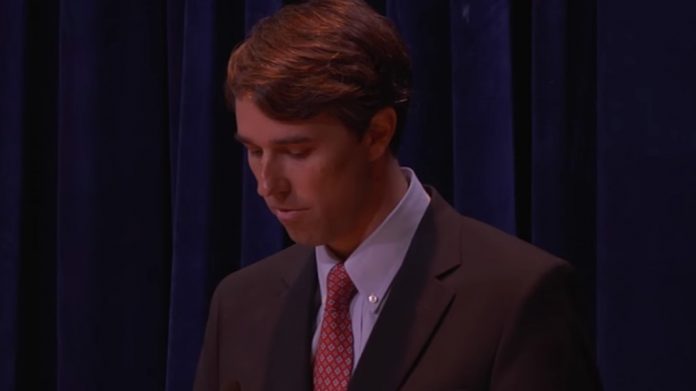 Radical “progressives” found their golden boy they think can bring down Ted Cruz in Texas.

But Beto O’Rourke just made a huge mistake.

And what he said about women could come back to bite him.

Beto O’Rourke was just recently let out of the dog house for equating illegal Mexican immigrants to pre-Civil War slaves in a Q&A session.

But he just stepped in it again.

This time for his shameful descriptions of women’s breasts and buttocks when writing a review for the Columbia Daily Spectator.

Beto O’Rourke apologized for once writing that the only qualifications of actresses in Broadway’s The Will Roger’s Follies were their “phenomenally large breasts and tight buttocks.”

Politico reports that O’Rourke wrote the comment about The Will Roger’s Follies actresses in 1991 while working for the Columbia Daily Spectator.

An archived version of O’Rourke’s column shows that he described the performance as “one of the most glaring examples of the sickening excesses and moral degradations of our culture.” In summary, he said the Broadway show consisted of a lead actor “surrounded by perma-smile actresses whose only qualifications seem to be their phenomenally large breasts and tight buttocks.”

O’Rourke is trying to cast himself as a squeaky-clean family man.

O’Rourke was arrested for a DUI when he was 26 years old and police reports say he tried to flee the scene.

The Left is also revealing its hypocrisy.

They are attacking Judge Brett Kavanaugh for drinking beer in college while turning a blind eye to Beto’s DUI and attempted flee from the scene.

They also are ignoring Rep. Keith Ellison’s (D-MN) use of his ex-girlfriend as a punching bag.

Instead of facing consequences, Ellison has been elevated into a Democrat Party leadership position as Deputy Chair for the DNC.

Leftists will stoop to any low to protect their own – as long as they have a “D” by their name.

Do you think Democrats should be removed from office for their hypocrisy?