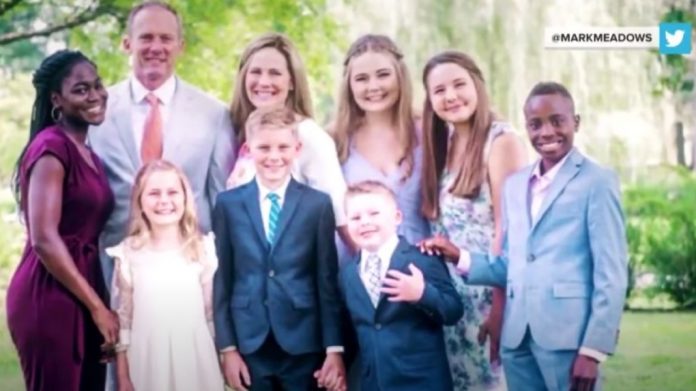 One leftist group just proved the lengths they’ll go to.

Because they just slapped a Supreme Court Justice with the ultimate insult — and the reason is beyond ridiculous.

Institutes of “higher” education are becoming increasingly useless as the woke agenda takes over.

But one alumni group just came up with a stunt that really takes the cake.

Justice Barrett is a conservative who leads a lifestyle that backs up her convictions.

The Supreme Court Justice who helped overturn Roe v. Wade has given birth to five children and adopted two.

Their brood includes one child adopted from Haiti who had to overcome severe physical challenges and her youngest has Down’s Syndrome — proof Barrett’s pro-life stance is no idle policy statement.

But because she sided against leftists by affirming that Roe v. Wade’s universal abortion-on-demand model is unconstitutional, a noisy and nosey group of former students from Rhodes College are demanding that Barrett be removed from the school’s “Hall of Fame.”

Incredibly, an entire group has apparently been created to take on the cause.

Now the “Rhodes College Alumni for Reproductive Rights” are throwing a fit claiming than Barrett has violated the Rhodes Honor Code through how she testified during her Senate confirmation hearings and her work as a Supreme Court Justice.

Of course, that’s nothing more than a load of garbage.

They’re trying to argue that she’s somehow violated her own claimed approach to judicial decision making because of the recent decision.

But even during her Senate confirmation hearing Barrett made it clear she didn’t consider Roe v. Wade to be a “super-precedent.”

“To define cases that are so well-settled that no political actors and no people seriously push for their overruling. And I’m answering a lot of questions about Roe, which I think indicates that Roe doesn’t fall in that category,” Barrett said at the time.

The fact is, an honest reading of Roe v. Wade has always revealed one of the weakest Supreme Court decisions ever made.

It’s shocking that a case that never even dealt with whether it’s constitutionally acceptable to kill an unborn baby was decided in a way that allowed children to be legally killed in the womb for decades.

But logic aside, her leftist peer group is committed to punishing her for crossing them politically.

“And we believe that Justice Amy Coney Barrett is one of the biggest current threats to our fundamental rights, the stability of our nation, and our democracy,” the alumni group wrote in a letter. “Moreover, as Rhodes alumni who pledged the same fealty to truth, loyalty, and service’ as she did, we find her actions to be a clear—and perhaps history’s most destructive to date— violation of the Honor Code we all hold dear.”

When protecting the lives of untold numbers of innocent babies can be interpreted as an “honor code” violation we’re all living in a word unacceptably corrupt.