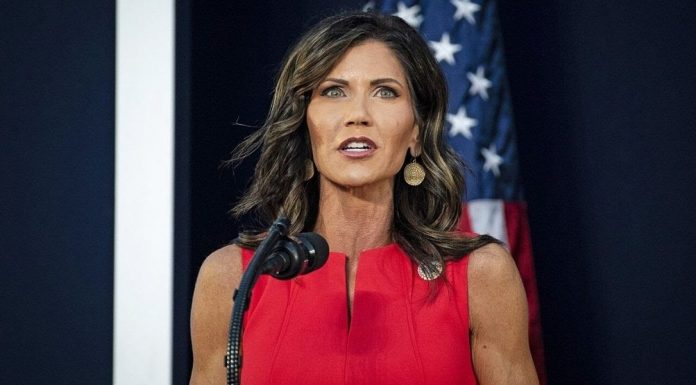 But she is changing her tune now that victory is just an arms length away.

And Noem just stabbed Christians in the back with an infuriating move.

In the last year, South Dakota made hopeful progress in the fight to protect women’s athletics from transgender encroachment.

Both chambers of the state legislature passed HB 1217, which affirms that a “team or sport designated as being female is available only to participants who are female, based on their biological sex.”

Earlier this month, Noem proudly declared that she was “excited to sign this bill very soon.”

But now that the bill’s passage is just a signature away, she is changing her tune following an intense pressure campaign from left-wing activists and the South Dakota Chamber of Commerce.

And she just buckled under pressure, stating that she wasn’t going to sign the bill, and is instead sending it back to the legislature.

She states that it was done over “vague and overly broad language,” suggesting various “style and form” changes.

Noem’s main objections are a supposed “unworkable administrative burden on schools, who under its terms must collect verification forms from every student-athlete, every year, as to age, biological sex, and use of performance-enhancing drugs,” along with the fear that participation at the colleagiate level “means compliance with the national governing bodies that oversee collegiate athletics.”

But advocates for the bill point out that her changes would effectively gut the bill, making it largely worthless.

The Alliance Defending Freedom torched Noem’s decision in a statement.

“We are shocked that a governor who claims to be a firebrand conservative with a rising national profile would cave to ‘woke’ corporate ideology,” said Alliance Defending Freedom general counsel Kristen Waggoner. “The governor tried to explain her betrayal with claims that her hands were tied by NCAA policy. But there is no NCAA policy that requires schools to allow males to compete on women’s teams as Gov. Noem suggests. The governor also vetoed the part of the bill that gives girls any legal recourse against unfair policies that arise. What’s left is mere lip service for women and girls forced to compete against biological males.”

With this decision, Noem has showcased to the world that she isn’t serious about standing up to the Left, despite talking a tough game.